Over the last few weeks, the ATP has released its schedule for the 2022 season. While a few tournaments have been chopped and changed, the Australian swing seems pretty much the same. And in exciting news, the ATP Cup will again be the first tournament played for the 2022 season. This is a team event, much like the Davis Cup, only the format is much shorter. As you may recall, Russia won the 2021 edition, beating Italy in the final. Russia has since backed this win up by taking home the Davis Cup title too. 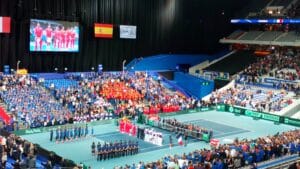 They really are the team to beat, but it’s still important to look at the main contenders all the same.

Teams with a fighting chance

When you look at how individual nations have developed players in recent years, this is always going to be a fun event! It’s also a nice change for players to enjoy a team event rather than the pressure of individual events to kick off the season. With that said, here are the teams that I feel have a great shot at winning the 2022 ATP Cup:

It’s hard to argue against Russia’s chances in team events right now. The strength and depth they have in their team are just ridiculous. Both Medvedev and Rublev are ranked inside the top 5 in the world. This is an incredible singles lineup, to say the least, but Russia also has guys like Karatsev and Khachanov waiting in the wings too. Sure, they don’t really have ‘doubles specialists’, but they still have an amazing team.

Much like Russia, Italy has an immensely talented squad. They have two guys ranked inside the world’s top 10 – Sinner and Berrettini. But in addition, they have guys like Fognini, Musetti, and Sonego to back up the top two when ready. The depth of the squad really is tremendous, and they could easily change their fortunes from last year.

Canada is my dark horse for the event! They have two guys inside the world’s top 20 – Shapovalov and Auger-Aliassime. Both are great singles players, but I feel they also gel well together as a doubles pairing too. The only thing letting Canada down is depth, as even Milos Raonic has now slipped outside of the world’s top 50.

How could we ever write off Serbia with Novak Djokovic in the squad? Obviously, he is capable of beating anyone in singles on his day. This alone guarantees points in singles, but Serbia does have other talented players too. For example, players like Lajovic and Krajinovic are pretty talented, but like other teams, Serbia doesn’t have the best doubles lineup.

Last but not least, we have Spain. Of course, if Nadal is fit and healthy, he will stack the team at number one. But beyond Nadal, you’ve got immense talents like Alcaraz, as well as veterans such as Bautista Agut and Carreno Busta. Spain could easily make a push for the title, but we will all have to wait and see.