The Bucks vs Heat game will kick off this year’s NBA playoffs. With that in mind, we have prepared a detailed preview of this match for you, along with some free betting picks and predictions.

The first game of the 2021 NBA Playoffs is the repeat of the Eastern Conference semi-finals in 2020 in which the Heat overcame the odds and eliminated the Bucks 4-1.

Will things be different this postseason or can the Heat surprise us again? Here are some of our top picks for the first Bucks vs Heat match in the series:

Keep in mind that odds are subject to change. Always check the odds with your bookie before you place a bet.

Milwaukee Bucks to Cover the Spread (-5)

The Bucks enter this duel with a chip on their shoulder after last season’s playoffs and they will try to make a statement in the first game.

The team is in good form and they have beaten the Heat in their last regular-season meeting only a week ago. They lead the head-to-head this season 2-1 and their wins against have been convincing. So, we expect them to beat the Heat once again and to cover the spread of five points.

The two teams have been playing drastically different basketball this season – Milwaukee Bucks lead the league in points per game with 120.1 PPG, but they also lead the league in pace. Meanwhile, the Heat are only in front of the Knicks in pace and they’ve scored just 108.1 PPG.

While we can see this game going either way, we feel that under 226.5 total points is the safer bet since defenses tend to get better in the playoffs and it’s likely that the Heat will manage to slow down the pace in this game, which should cause the Bucks to score fewer points than they normally do.

The versatile center has averaged 18.7 points per game this season but his scoring is not his biggest advantage – it’s his great defense and his playmaking abilities.

With the Bucks having serious defensive firepower in the paint, we can see Adebayo focusing on playmaking more than scoring, especially since he is not a big threat from the three-point line. So, betting on Adebayo to score fewer than 18.5 points sounds reasonable to us.

Milwaukee Bucks vs Miami Heat preview – Can the Bucks do better this year? 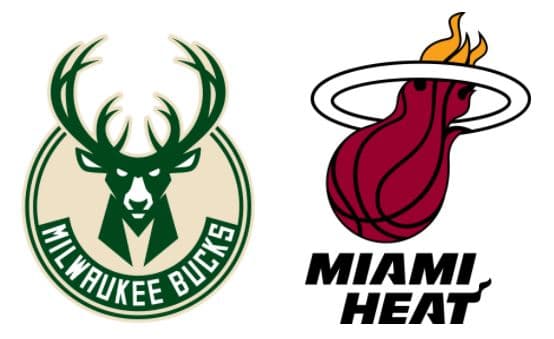 After being eliminated by the Heat last year, the Bucks will be looking for redemption this postseason. And with both teams in good form, we can expect interesting series. So, let’s take a closer look at the teams.

The Bucks ended the season with eight wins and two losses in the last ten games, so they have been in great form lately. Overall, the team from Milwaukee finished with a 46-26 record, which was enough to claim the third seed in the East.

The reigning two-time MVP Giannis Antetokounmpo will probably not defend his MVP title, but the Greek still had a great season and he will be in the conversation for the award at least. Jrue Holliday proved to be a worthy signing and the Bucks will be hoping that he can be the difference-maker in the postseason compared to the previous two years when the team disappointed in the playoffs.

Khris Middleton, the team’s second scorer with 20.4 points in the season, has missed the last game of the regular season due to a sore ankle and he is questionable for the first game with the Heat. That being said, it’s more likely that he will play than otherwise. Bobby Portis is also on the injury list and his appearance will also be a game-time decision.

Like their first-round opponents, the Heat have also finished the season with an 8-2 record in their last 10 games. For the entire regular season, Miami had a record of 40-32, which puts them in the sixth seed for the playoffs.

The season has been marred with injuries for the Heat since Butler and a few other players have missed some big chunks of games. At one point, it seemed like the reigning champions in the East could even struggle to get in the playoffs, but things have fallen into place for them in the last third of the regular season.

Victor Oladipo only played in four games for Miami before his season was over due to surgery and he will also miss the playoffs. Jimmy Butler is on the injury list and he will be a game-time decision, although we expect him to play, as well as Andre Iguodala and Kendrick Nunn.

Where Can I Watch the Game?

You can watch NBA games this postseason on NBATV, ESPN, ESPN2, TNT, and ABC. You can also stream games using the NBA League Pass or use streaming services like FuboTV, YouTube TV, AT&T TV, Slingo TV, Hulu Plus Live TV, and a few others.

What Are the Best Bookies for NBA Betting?

Some of the best US bookies for betting on NBA games, including the Bucks vs Heat playoff series, are DraftKings, FanDuel, BetMGM, William Hill, PointsBet, Unibet, etc.

How to Place a Bet on Bucks vs Heat?

If you want to bet on the Bucks vs Heat series, go to the betting website where you have an account or create a new account at some of our recommended bookies.

Find the Bucks vs Heat game and choose the market you like. Click on that market and you will add the selection to your betslip. Then, enter the amount you wish to bet and confirm your bet.

Who Is the Favorite In This Match?

Milwaukee Bucks are the favorites in this game at -200 odds.

When Will the Bucks vs Heat Game Be Played?

Where Will the Bucks vs Heat Game Be Played?

The game will be played in the Fiserv Forum in Milwaukee.