Yokohama FC takes on the challenge of runaway J1 League leaders Kawasaki Frontale on June 02. We have done extensive research for this preview, so we can help you out with a few free betting tips.

Free Match Tips from Punditfeed for Yokohama vs Kawasaki Frontale

Here are some bias-free tips we have put together for Yokohama vs Kawasaki Frontale.

In this fixture, J1 League’s two contrasting sides take on each other. The unbeatable Kawasaki Frontale make the trip to Mitsuzawa Stadium, where bottom-placed Yokohama FC await them. The hosts are winless in their last four competitive fixtures, that solitary victory against Shonan Bellmare has been their only one in the 2020/21 campaign. Kawasaki Frontale should not have any issues negotiating their challenge to continue their rise in Japanese top-flight football.

Yokohama FC have only scored 12 goals in their 17 league outings. However, they have seen eleven of these fixtures with three or more goals owing to their shambolic defensive record of 42 goals conceded. The Azzuro Nero have scored a league-high 49 goals this season and should be able to pile further misery on Yokohama to ensure the Over 2.5 goals prediction comes true.

Kawasaki Frontale have only conceded 15 goals this season. While their defence has been impeccable, recent fixtures have revealed chinks in their armour. Five of the 15 goals have been conceded in their last five matches. Yokohama have struggled to score goals but a return of six goals in their last five home matches shows improvements have been made. Expect Kawasaki to dominate the scoreboard but Yokohama should get a consolatory strike against their name.

The Mitsuzawa Stadium based entity have struggled for form this season and are slated for relegation to the second division. They need to pick up their act or the demotion will be a certainty with fixtures to spare. The defence is the first area that needs attention. Yokohama have improved in recent fixtures but concerns remain over their abilities. The attacking department is similarly short-handed with the Brazilian midfielder leading the scoring charts with his three goals.

The Azzuro Nero are on course to defend their title. With the first half of the season in their rear-view mirror, they have already claimed a fifteen point lead and should be able to coast to their fourth J1 League title in five years. Chief to their cause has been the form of Leandro Damiao. The Brazilian forward has scored 12 goals and also chipped in with seven assists in Kawasaki Frontale’s cause.

Looking for the best odds for Yokohama vs Kawasaki Frontale? We’ve got you covered. Check out our list of odds from the popular bookies and a few important stats to help you make a good prediction.

FAQ about Yokohama vs Kawasaki Frontale 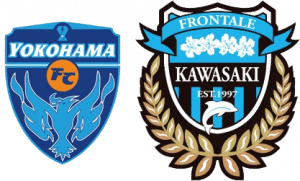 Kawasaki Frontale are favourites in the fixture @ odds of 1/5.