Willem II take on struggling Zwolle in Tilburg in the Eredivisie this weekend. Read our free predictions and find the best odds for the fixture below in our match preview.

Willem II are targeting their second win on the bounce when they welcome Zwolle to Tilburg.  Read our top three expert predictions for Saturday’s fixture below.

Willem II were beaten for the second time in as many games when they were shot down by NEC last week, a result that followed hot on the heels of a 1-0 reverse to Vitesse. Willem II meanwhile, played Vitesse themselves in their last assignment and hammered their opponents 3-0 on their own patch. With the confidence spiking following that unexpected, convincing triumph, Willem II are our tip to pocket the points this weekend.

Willem II adopted a more attack-minded approach at Vitesse last weekend and Fred Grim’s decision to take the shackles off paid big dividends with their excellent 3-0 win. Grim would be wise to send his troops out with a similar mindset against struggling Zwolle and the host’s fresh attacking intent makes them a cracking bet in the over 1.5 team goals stakes.

Ghanaian attacker Kwasi Wriedt got his campaign up and running last week with his first strike of the season against Vitesse and we’re tipping the 27-year-old to double his tally on Saturday. Wriedt scored the opening goal when Willem II last hosted Vitesse in Tilburg back in January and his early momentum on the rise, the forward can make a similar impact this weekend.

Fred Grim’s tenure as Willem II boss got off to a nightmarish start when the Tricolores were trounced 4-0 by Feyenoord on the opening weekend of the Eredivisie season, though the players rebounded in spectacular style at Vitesse. Willem II roared to a 3-0 win in Arnhem that few had anticipated pre-match and they should take a healthy dollop of new self-belief into Saturday’s game against Zwolle as a result.

Zwolle’s sixth manager in as many seasons – Art Langeler – saw his new team lose for the second time on the spin in the Eredivisie when PEC lost to recently-promoted NEC last Friday. Just like their opening day defeat to Vitesse, Zwolle enjoyed more possession and mustered more attempts than their conquerors and Langeler must be wondering what his team have to do to reverse their fortunes.

Top Betting Odds and Stats for Willem II vs Zwolle 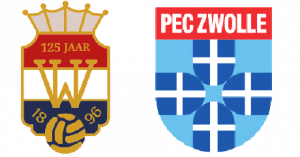 Saturday’s fixture will be contested at the Koning Willem II Stadion.

The clubs last met on January 22 earlier this year. Zwolle beat Willem II 3-1 on the occasion.