Willem II and PSV face off in the Dutch Eredivisie on Saturday. Read our predictions and find the top odds for the fixture below in our expert match preview.

Third meets second in the Eredivisie on Saturday when Willem II take on PSV in Tilburg. Read our top three expert predictions for this weekend’s game below.

PSV bounced back from their surprised 4-0 loss at home to Feyenoord in typically determined style in midweek when they battled their way to a 2-1 triumph at Go Ahead Eagles. The Eindhoven giants look a solid bet to tack another victory to their record on Saturday against a Willem II side they’ve beaten five times in the clubs’ last six meetings. The hosts are flying high in third spot, though they have benefitted from a kind run of games and a dose of reality could be served to them this weekend.

PSV have defensive wrinkles to iron out however, and the Boeren managed to keep just one clean sheet in their last five matches in all competitions. Willem II have scored at least once in four of their last five Eredivisie assignments and the Tricolores should have enough confidence to take a chance against the visitors. Ultimately, PSV’s superior class should tell, so back both teams to score in Tilburg.

Games between Willem II and PSV always seem to produce thrills and spills, indeed, eight of their last nine Eredivisie encounters have delivered over 2.5 goals and the same totals line is worth pursuing this weekend. Seven of PSV’s last eight fixtures spawned three or more goals and with both clubs expected to push for points on Saturday, we’re tipping over 2.5 goals to land again.

Midfielder Wesley Spieringhs is Willem II’s only major injury concern ahead of Saturday’s game and manager Fred Grim will need all of his players fit and firing to cause an upset against PSV. Grim has Willem II up in third spot in the early weeks of his tenure, though the Tricolores have benefitted from a kind run of fixtures of late.

Richard Ledezma and Shurandy Sambo will be joined on the sidelines by Mario Gotze this weekend after the German schemer picked up a muscle injury. Ibrahim Sangare is also rated as doubtful for PSV’s trip to Tilburg. The Boeren needed an 86th-minute strike from Marco van Ginkel to snatch three points at the death against Go Ahead Eagles last time out.

Top Betting Odds and Stats for Willem II vs PSV 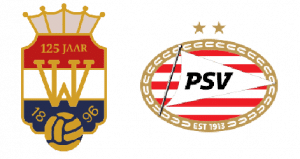 Betfred have the best odds for Saturday’s game between Willem II and PSV.

PSV are competing in the Europa League this season, though Willem II have no continental football to look forward to.