This is a preview of the League One meeting between promotion-hopefuls Wigan and Burton Albion. The match will take place at the DW Stadium just a few days after Wigan’s latest midweek disappointment.

Wigan continued with their streak of poor results in midweek matches after losing 2-1 at home to Lincoln City. This was the third consecutive home defeat for Wigan. Burton were unable to make it three consecutive league this after losing 3-1 to Oxford during the weekend.

Wigan to win the match

Burton Albion do not have the greatest away record in the league after only eight points – a tally which looks decent thanks to the recent win over Fleetwood – from the seven matches. Wigan are on a three game losing streak at home, but a lot has to do with their struggles in midweek matches. During the weekend games, Wigan do play quite well. The Latics have also not suffered a defeat against Burton since 2015.

Wigan have not been prolific at home, but the last three matches at the DW Stadium have been with more than 2.5 goals. In a match involving Burton, there is likely to be higher possibility of over 2.5 goals, as has been the case in four out of the last five league matches.

Charlie Wyke has been a strong goalscoring asset for Wigan. The summer signing from Sunderland has been able to grab five goals in 13 matches. He has gone through a drought in recent weeks with just one goal in the last three matches. However, Wyke tends to score more at home with his last three goals coming at the DW Stadium.

Wigan are starting up the possibility of a fourth consecutive home defeat and it will intensify pressure on manager Leam Richardson, who struggled to explain the reason for his team’s midweek struggles. Gwion Edwards is the only player unavailable for Wigan due to a thigh injury.

Jimmy Hasselbaink has seen his Burton team knock on the doors of the top six places over the last few weeks. At this juncture, the loss against Oxford comes as a blow and Burton Albion have to recover from the setback through three consecutive away matches in three different competitions. There are no injury problems for Burton.

Analysing the League One Stats for Wigan vs Burton

FAQs on Wigan vs Burton game 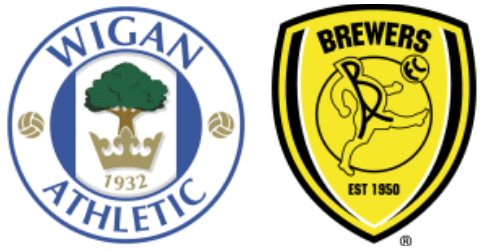