This preview focuses on the EFL Cup meeting between Watford and Stoke at vicarage Road. The hosts are struggling for consistency and form in the Premier League, while the visitors are looking to cement their play-off contention in the Championship.

Watford overcame a sequence of back-to-back losses with a 3-1 defeat over Norwich City at Carrow Road. Stoke City, meanwhile, went two matches without a win following the 2-1 loss against Derby County.

Watford to win the game

Watford have been struggling for consistency so far in the league. However, Vicarage Road continues to be a strong place for the Hornets, while Stoke City come into this match on the back of some poor away performances. The most recent came during the weekend against Derby County. Due to the visitors being quite poor on the road, Watford might pick up the necessary win.

Watford have not been able to create too many opportunities in the last few games. The same applies for Stoke City – especially in away matches. Even if Watford are unable to come up with a sizeable performance, Stoke may not take advantage.

The two teams have not been outstanding over the last few games. This is likely to have a significant impact on the opportunities created in the 90 minutes. Watford might even come away with a clean sheet, as Stoke City do not play well when they are away from the home.

Watford vs Stoke: Watford looking to match the achievements of 19-20?

Watford have had a habit of coming close to the final stages of the EFL Cup. The highlights of the team where the semifinal appearance against Liverpool in the 2004-05 season and reaching the quarter-finals against Spurs in the 2008-09 season. In recent years, however, Watford’s achievement in this competition has been limited to getting past the third round or fourth round.

Stoke City came within a whisker of reaching the semifinals last season, but the Potters might find it difficult to repeat the achievements of last season considering the recent form. Furthermore, Stoke City will now be trying to revive the excellent start to the Championship season that led to the team occupying the top six places even now.

FAQs on Watford vs Stoke game 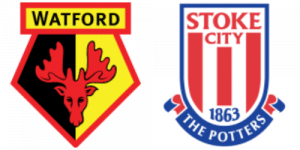 Where is the match going to take place? Vicarage Road

Who is the favourite team to win the game? Watford