Vitesse and Fortuna Sittard lock horns at the GelreDome in the Dutch Eredivisie on Saturday. Read our predictions and find the top odds for the fixture below in our expert match preview.

Vitesse have won three of their last four games in all competitions ahead of their clash with Fortuna Sittard on Saturday. Read our top three expert predictions for this weekend’s game below.

Vitesse are still searching for their first point at home this season, though their recent surge of three wins in four matches, all of which were secured on the road, sets them up nicely for a winnable clash with Fortuna Sittard on Saturday. The visitors are in the midst of a three-game losing slump and their confidence was dented by a 5-0 hammering at the hands of Ajax on Tuesday. Vitesse can push at the same dent to claim three points at the GelreDome.

Viewers tuning in to see goals might be in for a disappointing afternoon however. Vitesse are averaging just 0.83 goals per 90 minutes in the Eredivisie since the summer, while Fortuna are notching just once per game on average. With few match-winners in attendance this weekend, we’re tipping under 2.5 goals to be scored in Arnhem.

Fortuna Sittard have had to endure a dismal start to their 2021/22 campaign in the Netherlands and in their five Eredivisie matches so far, Sjors Ultee’s side have been trailing at the interval on four separate occasions. Indeed, no club in the league has conceded more first half goals than Fortuna this term and that in turn opens up an opportunity to back Vitesse in the half-time result market this weekend.

Danilho Doekhi should be back in contention this weekend following his one-game ban for a sending off against Twente, and Vitesse have few selection issues to worry about elsewhere. Vites battled their way to a 1-0 win at Groningen last time out, though their home form – where they have lost twice in as many games – needs to improve.

Zian Flemming and Arianit Ferati are out of Saturday’s game with an injury and COVID-19 respectively, and it remains to be seen whether key attacker Lisandro Semedo will be fit enough to make his comeback. Fortua were annihilated at home by Ajax in midweek, though a heavy defeat to the all-conquering champions wasn’t entirely unexpected.

Top Betting Odds and Stats for Vitesse vs Fortuna Sittard 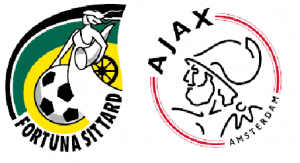 Fortuna Sittard and Vitesse drew 3-3 when they last met on May 13.

What stadium is the game being played at?

Saturday’s match will be played at the GelreDome in Arnhem.