Both teams are located at the bottom of the table and will face each other in search of three points that will allow them to get out of the bottom. Both teams tied the previous day and will try to get back to winning ways, which have eluded them since matchday 1.

The best Picks and Predictions for Velez vs Atletico Tucuman

To set the right bet for Velez vs Atletico Tucuman, read about our predictions and betting tips for free:

In the two most recent meetings, El Decano won once and drew the other. Besides, Velez will be playing for a place in the quarter-finals of the Copa Libertadores a few days later, so some of their usual players will probably be absent. For these reasons, we think the visitors can take all 3 points.

Few goals have been scored in the last h2h, in fact in the last 4, the result has never been over 2.5 goals. In addition, since the start of the new tournament, almost all the results of the duels of each team have ended with few goals, so maybe it will be repeated this time.

In recent matches, there were never any BTTS. In the 7 games, Velez played in June it only happened twice, while this happens in 50% of Tucuman’s games. We predict that only one team will score in this duel.

Will El Fortin be bigger at home? – Velez vs Atletico Tucuman Preview

Fortin has been somewhat inconsistent in the league, with 1 win, 2 draws, and 2 defeats. In round 5 they drew 1-1 in their visit to Defensa y Justicia, although Velez had a bit more of the ball, both teams had almost the same amount of shots, most of them unsuccessful. When it looked like it was all going to end in a 0-0 draw, El Halco took the lead in the 88th minute, but it took only 2 minutes for El Fortin to equalise. On the other hand, Velez has just beaten River in the first leg of the Copa Libertadores, there will probably be some changes in the starting line-up due to the fatigue of some players.

After five rounds, El Decano is in the middle of the table. Lucas Pusineri’s team is one of the few teams that remain undefeated in the tournament, but they have only won one match, the other matches have ended in draws. In their last matchup, Tucuman hosted Godoy Cruz at home, in that game Atletico had less possession but more shots on goal. It was El Decano who opened the scoring in the first half, but La Tomba equalised with 15 minutes remaining.

Top Analysis of Velez vs Atletico Tucuman Stats and Odds

If you want to bet on the top odds for Velez vs Atletico Tucuman, check our selection of odds from the best betting sites: 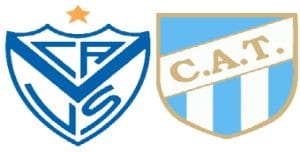