The second game to be played on Sunday in La Liga is the duel between Valencia and Valladolid. With both teams close to the relegation zone, it will be an important game for them, so check our preview if you want to know more about it.

Our top free tips and predictions for Valencia vs Valladolid

With both teams a few points away from each other, this duel may be hard to bet on. With that in mind, we have prepared a few betting tips for you to help you out:

It’s time for The Bats to win a game, after six matches without a win. They play at home against one of the worst teams in the league and they need to get some points to enjoy a stress-free rest of the season, without worrying about any relegation issues. Furthermore, Valencia has won three of the last five games between these two teams, so our prediction seems reasonable.

The French striker has been one of the most reliable scorers for Valencia in recent years, although it was far from his form in Sevilla or even Atletico Madrid. And while Gameiro has only scored four goals in La Liga this season, we have a feeling that he could find the net in the next game when it matters for his team.

Valencia vs Valladolid preview: A chance for a piece of mind for Valencia

This game could determine the faith of both teams, although Valencia is a bit further away from the relegation zone, while Valladolid is too close to be comfortable. So, let’s take an in-depth look at both teams:

With one win in the last eight games, The Bats have found themselves in a situation that they probably couldn’t imagine – dangerously close to the relegation zone. Of course, the situation is not yet critical since Valencia is six points away from the first team to be relegated and it’s unlikely that they can drop that much in the remaining four games, but it’s certainly an uncomfortable position to be in for a team of such stature. Luckily, the team is almost fully healthy since only Gaya is unavailable at the moment.

Although Valladolid has only lost two of their last ten games, only one of those games was a win – seven times the team has drawn in that time. So, it’s no wonder that they are currently just a point ahead of the relegation zone and the end of the season is bound to be stressful for them. The first of their four remaining games is a trip to Valencia and the team will be without Orellana, Garcia, and Perez for this match.

Valencia vs Valladolid – Odds, stats, and other useful information

The best odds for football matches can be often found on different websites. With that in mind, we have selected odds for Valencia vs Valladolid from a few different bookies:

Usual questions for Valencia vs Valladolid 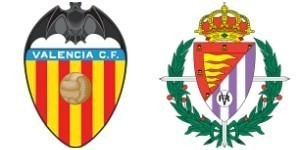