In one of the tightest groups in the Copa Sudamericana, Universidad Católica and Santos will face each other in the standings. Currently, they both have 4 points, and both are as close to first as they are to last place.

Universidad Catolica vs Santos – The latest predictions and picks

To set the right bet for Universidad Catolica vs Santos, read about our predictions and betting tips for free:

On matchday two they met in a duel that ended 3-2 in favour of the Brazilians. In the last 5 away games Santos has not been able to win, while Universidad Catolica has won their last 3 home games.

In their recent h2h, the Ecuadorians played a good game in Brazil, we think they can improve their performance at home and take all three points.

Although the previous h2h on matchday two ended with a total of 5 goals, the visiting club doesn’t tend to score many goals whenever they play away from home they have scored just 2 in their last three visits.

Santos has not allowed their opponents to score many times at home either, so we expect the same to be the case against Universidad Catolica

In their last match, Santos lacked scoring chances (3) and lacked punch. The same was true for Universidad Catolica who had only 2 shots on goal.

It would not be unusual to see a team unable to score for the full 90 minutes.

In the previous Copa Sudamericana matchday, the Ecuadorians achieved a great 2-0 victory over Banfield. In that match they achieved what they could not in other matches, they had many shots on goal.

The same did not happen in their last Ecuadorian league match, where despite having 71% possession, they had only two shots on target. Their opponents, Orense, needed only one clear-cut chance to open the scoring and take all three points.

The previous week had been a disappointing one for the Brazilian side, as a draw in the Copa and a defeat in the Brasileirao saw them drop out of the top places in both competitions. The concern for coach Marcos Busto is that his team has lost possession in those last two games.

Against Union La Calera, they had less than 40% ball possession and Saco Paulo only 43%. Despite this, their opponents’ shots on goal were few, but at the same time very convincing.

The best analysis of Universidad Catolica vs Santos stats and odds 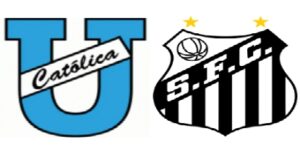 If you want to bet on the top odds for Universidad Catolica vs Santos, check our selection of odds from the best betting sites:

Some frequent questions for Universidad Catolica vs Santos

Who is the host? Universidad Catolica is the host at Olimpico Atahualpa in Quito, Ecuador

Who is the bookmakers’ favourite to win? The more probably winner is Universidad Catolica at 8/13 (1,62) odds