Matchday 1 of the Argentines First Division will have one of the most even matchups. Tigre will show why it was one of the finalists in the previous tournament, while Unión will try to show the level that keeps it in the Copa Sudamericana.

Our best betting tips for Union vs Tigre

To set the right bet for Union vs Tigre, read about our predictions and betting tips for free:

The last four meetings between these two teams have been even at 2-2, with one win for each side and two draws. Their closest duel was a year ago in this same stadium where they will meet this weekend, on that occasion Tigre achieved a stupendous 3-1 away victory. Although Tigre was a finalist in the previous tournament, we think the home team has an advantage playing in their stadium so they will probably get the win and the three points.

The games played by these two teams tend to end with a high score, in fact in the last four h2h there were a total of 17 goals, which is an average of at least 4 goals per game. We believe that this time they will also score more than twice.

In their last meetings, there has not been a single clean sheet called the goal-scoring numbers for each team have been very even, with 9 goals for El Matador and 8 for El Tenguete. Based on these stats we deduce that both teams will be able to put the ball in the net at least once.

The end of the group stage was disappointing for the team coached by Gustavo Munua, since after 9 matchdays they were in the qualification places with 17 points. However, on match day 10, a negative streak began, which would end with 5 consecutive defeats. Despite the failure in the national tournament, Union was able to advance to the round of 16 of the Copa Sudamericana.

The Azules del Norte was the great surprise of the previous tournament because despite maintaining a regular level during the group stage, they struggled in the final rounds to advance to the quarterfinals.

Even with all this controversy, the team coached by Diego Hernan Martinez managed to defeat River Plate and Argentinos Junior to advance to the final game against Boca Juniors. In this match, El Matador was unable to overcome the Xeneize defense, who were precise in each of their attacks to win 3-0.

Great Review of Union vs Tigre stats and odds

If you want to bet on the top odds for Union vs Tigre, check our selection of odds from the best betting sites:

Main Questions for Union vs Tigre 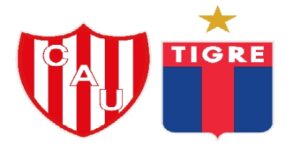 Who is the bookmakers’ favourite to win? The more probable winner is Tigre