After an opening h2h in the high altitude of Santa Cruz de la Sierra, Oriente Petrolero will be looking to avenge the defeat suffered on matchday 2. We have prepared an analysis for this match, which includes predictions and betting tips for free.

Our best picks for Union vs Oriente Petrolero

To set the right bet for Union vs Oriente Petrolero, read about our predictions and betting tips for free:

Union to Win to Nil

Union to Win to Nil

Although the Argentine club is the favourite to win this game, we think Oriente Petrolero will take advantage of the altitude. So, it would not be a surprise if the home side keep the three points at home

Both teams have a low scoring average, however, Union was able to thrash the Refineros at home. The Bolivians have struggled defensively, both in the Copa Sudamericana and in the Bolivian League.

Oriente Petrolero has hardly had any scoring chances in their first 3 cup games; they have scored only two goals in the tournament. Moreover, they have not scored on the road yet, so we assume they won’t be able to score this time.

Previously, in their last match of the Argentinean League, Union was playing for three important points for their playoff aspirations. Despite playing at home, they were defeated by Defensa y Justicia, who was one of their direct rivals.

Defensa y Justicia scored in the 15th minute of the first half, which allowed them to retreat and close spaces for Union, who nevertheless had many shots on goal. This defeat leaves the Argentinians with no chance of the playoffs and with the need to perform better in the Copa Sudamericana.

With three defeats in the first half of the group stage, Oriente Petrolero has all but said goodbye to the quarter-finals. They have failed to make a difference to any of their opponents, and have shown themselves to be the weakest team in the group.

In the Bolivian league, they have not lost any of their last four games and are in fourth place. Last weekend, the Bolivians achieved a great 2-1 victory over Atletico Palmaflor, goals scored by Luciano Guaycochea and Facundo Suarez for the Refineros.

The best analysis of Union vs Oriente Petrolero stats and odds

If you want to bet on the top odds for Union vs Oriente Petrolero, check our selection of odds from the best betting sites: 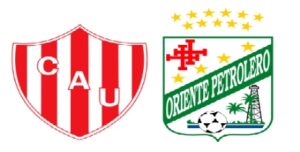 Who is the bookmakers’ favourite to win? The more probably winner is Union at 2/11 (1.18) odds