Today, we will check out the latest info about the upcoming League One fixture between Wimbledon and Fleetwood.

Below, our betting experts suggested the following free betting tips and predictions for the match this weekend. If you want to see more League One predictions, you can check out our website’s latest articles.

All odds are from Ladbrokes and are subject to change. Make sure to double-check them before continuing forward.

Most of the matches that both teams played this season resulted in over 2.5 goals scored. For example, thirteen out of the seventeen fixtures for Fleetwood ended that way, including the last five they played. Also, ten out of the seventeen games for Wimbledon ended with more than 2.5 total goals scored. That includes two of the last three they played.

Although both teams are very low in the League One table, we think that Wimbledon has a light chance of winning and improving their head-to-head record against Fleetwood. The away team has two injuries on the squad that has been out for months – Brad Halliday and Joe Garner. Danny Andrew is at risk of suspension with four yellow cards.

Wimbledon on the other hand is in perfect shape injury-wise without any players sidelined because of an injury or a suspension. They also don’t have any players at risk of suspension, which is good for them. There might also be a lot of goals scored during the match this weekend according to our experts.

In the tables below, you can see the most recent statistics and team forms before the upcoming Wimbledon vs Fleetwood fixture. 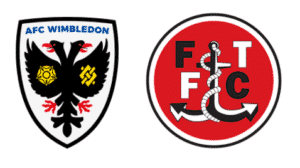