Ross County might be rock bottom of the Premiership standings right now but a five game form table puts them third. Does that make them obvious winners? Find out with our St Mirren vs Ross County preview here along with the predictions and free tips we mention along the way.

Ross County are the basement club right now but find themselves in much better form that their hosts. St Mirren are on a six game winless run and have taken just three points from the last 18 available. Ross County meanwhile are in really decent form right now; they’ve taken seven points from 15 and have collected four from their last two games. Their performances have been good to with a win over Hibs and a demolition of Dundee. We see them winning here, which would break a poor streak against Ross County.

Next up for us is an under 2.5 goals tip. The stats don’t suggest this is nailed on but a look over the betting odds show this is where the value is – that’s our opinion anyway! Ross County are the team that call the ‘under’ bet into question having gone over 2.5 in three of their last five. That said, their last two have gone under that marker and St Mirren have seen fewer than three goals in each of their last four games. On top of that, three of the last five head to heads have gone under 2.5 too.

We’ve just stuck our neck out on an under 2.5 goals tip and now we predict that one of the sides will fail to score in the match. St Mirren have seen at least one team fail to score in three of their last five games. Ross County have seen two ‘nils’ in their last five matches. To further evidence this tip, we point to the last meeting between the sides that took place at the SMISA Stadium in Paisley; it saw one side blank.

The best odds for St Mirren vs Ross County

St Mirren are only only two points off the top half of the table but look at their recent displays and there is only one way they’re heading and it’s not into the top half, that’s for sure. A five game form table has them second bottom. They’ve only scored three goals in their last five so they could really do with Eamonn Brophy finding some form here.

Unlike their hosts, Ross County can look at the table with some positivity despite sitting bottom because their form has been pretty decent of late. A big part of that form has been Regan Charles-Cook who has two goals and an assist from his last four games; he’s only played the full 90 once in that period.

The final word on St Mirren vs Ross County 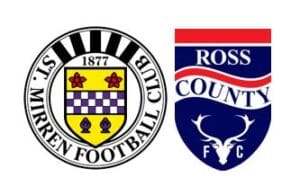