Hearts continue to be the ‘best of the rest’ behind the Glasgow giants in Scotland. Will they chalk up another win here? Find out with our St Mirren vs Hearts preview here along with the predictions and free tips we mention along the way.

St Mirren have done a good job defensively, especially recently; they’ve kept four clean sheets in their last seven games. In contrast, Hearts have struggled in front of goal lately; they failed to score in three of their last five games Conversely, the Jam Tarts have kept their fair share of clean sheets; they did not concede in three of their last six games. It’s worth mentioning that at least one side failed to score in four of Hearts’ last six games, in four of St Mirren’s last seven games, and in four of the last seven meetings between these teams; with this in mind, we shouldn’t expect goals at both ends.

The best odds for St Mirren vs Hearts

St Mirren have been on fire recently; they’ve won three of their last four games, and they have no losses in their last eight games across all competitions. Steve Robinson’s men will look to stretch their unbeaten run to nine games as Hearts come calling; it’ll be interesting to see how they’ll fare with Connor Ronan leading the line.

Meanwhile, Hearts are coming off a disappointing loss at St Mirren; that was their third consecutive loss in the league, the Jam Tarts have no wins in four league games. Robbie Nielson’s men will hope to snap their rotting streak as they take on St Mirren; all eyes will be on Liam Boyce today.

The final word on St Mirren vs Hearts 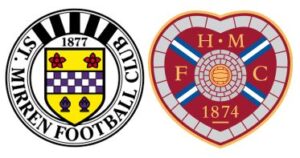