There is little between these teams in the League One table so whilst this game won’t alter the overall feel of their season, it could define who will finish highest of the pair. Will either get three points from this match? Find out with our Shrewsbury vs Lincoln preview here along with the predictions and free tips we mention along the way.

To be fair, both teams are not enjoying their best campaign; Shrewsbury are 16th on the League One table, while Lincoln are two spots below them. However, Shrewsbury have had a good run recently, they won their last two games, scoring eight goals; Steve Cotterill’s men have lost just once in their last six games. On the other hand, we have a Lincoln side that’s lost five of their last eight games; they’ve won just two of their last nine games. Shrewsbury have been relatively better, they also have the advantage of playing at home; for these reasons, we are making the prediction that Shrewsbury will emerge victorious.

Shrewsbury have done a really good job defensively, especially recently; they kept five clean sheets in their last six games. In the same vein, Lincoln kept two clean sheets in their last three games; however, they failed to score in two of their last four games. Both teams’ recent games have mostly been one-sided in terms of goals; at least one team blanked in five of Shrewsbury’s last six, and in three of Lincoln’s last four games. With this in mind, we shouldn’t expect goals at both ends.

The best odds for Shrewsbury vs Lincoln

Shrewsbury are coming off impressive back-to-back wins against Rotherham and Morecambe; they scored eight goals in those two games, conceding no goals. Steve Cotterill’s men will be eyeing their third consecutive win as they welcome Lincoln to New Meadow; it’s worth keeping an eye on Daniel Udoh.

Lincoln have not  done too well in recent weeks; they have two wins, a draw and five losses in their last eight games. Michael Appleton’s men will hope to improve their poor form as they take on Shrewsbury; will John Marquis be able to provide the goals?

The final word on Shrewsbury vs Lincoln 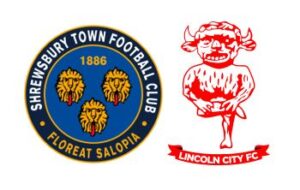