Below, we have gathered the most recent odds and predictions for the upcoming Shrewsbury vs Charlton fixture this weekend. If you want to see more League One odds, you should head over to our website.

Our betting experts came up with the following free betting tips and predictions regarding the upcoming Shrewsbury vs Charlton fixture this weekend.

All odds are from Ladbrokes and are correct at the time of writing. Before betting, make sure to double-check them because they are also subject to change.

There has been a lot of BTTS game involving Shrewsbury recently, including four of the last five they played regardless of the tournament. Charlton’s latest game against Morecambe also ended that way. Three of the last four matches between them also ended with both teams scoring goals.

Charlton is in a better position in the League One table with twenty-three points, while Shrewsbury is in the relegation section with sixteen points. If that isn’t enough to convince you, Shrewsbury won only one of the last five matches, while Charlton won or drew all five of their most recent League One matches. Charlton also won two of the last three head-to-head games between them that didn’t end with a draw.

Charlton is our favorite in this match-up not only because they are seven points ahead of Shrewsbury in the League One table. They also have played a lot better in their recent fixtures despite having one injury on the squad. Midfielder Jake Forster-Caskey has been out with a cruciate ligament injury since May this year.

For Shrewsbury, the prognosis isn’t positive and they might stay in the relegation section for yet another week because we think they won’t gain any points this weekend. They don’t have any suspended or injured players, but midfielder Josh Vela is at risk of suspension with four yellow cards already.

Head-to-Head Data and Bookmaker Odds for Shrewsbury vs Charlton

Below, you can read about the most recent matches and statistics for the Shrewsbury vs Charlton fixture.

Common Queries Regarding Shrewsbury vs Charlton 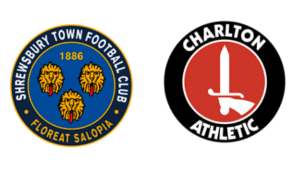