In this article, we will check out the upcoming Shrewsbury vs Accrington fixture and see if we can give you the best predictions and free betting tips for the upcoming match.

Below, we will present you with the best odds, predictions, and betting tips for the upcoming Shrewsbury vs Accrington fixture this week.

These odds are all from Ladbrokes and are subject to change. Make sure to double-check them before continuing forward.

Accrington has the upper hand because they are in better form recently compared to their opponents. Also, they are eight points ahead of them in the League One table. Four of the last five matches for Accrington ended with wins, while Shrewsbury lost two of the last five games they played. It’s not that big of a difference, but we don’t think Shrewsbury’s recent climb from the relegation section would help them this week against Accrington’s almost perfect recent form.

There isn’t a big chance the match this weekend to end with more than 2.5 total goals scored considering that three of the last four matches between them ended with under 2.5 total goals. Also, four of the last five games for Accrington in League One ended with low-scoring outcomes, as well, and more than half of Shrewsbury’s matches this season ended similarly.

Neither Shrewsbury nor Accrington has any injured players on the roster, which is good, and there are no suspended players either. Both of them are trying to improve their form and climb up the table, but we don’t think it would be Shrewsbury’s time to shine this week. Accrington is in better form and proved recently that they have what it takes to take back their place at the top of the table, but they would have to work hard for it until the season ends. We also don’t think there would be a lot of goals scored and most likely only one team will score during the game.

All of the stats and data below are concerning the upcoming Shrewsbury vs Accrington match this week.

Common Queries Regarding Shrewsbury vs Accrington 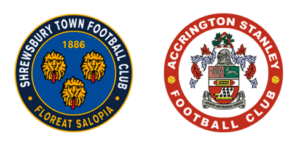