After dropping two points in the last game, Rotherham would be more offensive to secure the lead of points for the first position in their next game against Morecambe. The visitors also enter the game on the back of a draw.

Free Match Tips from Punditfeed for Rotherham vs Morecambe

Here are some bias-free tips we have put together for Rotherham vs Morecambe.

Rotherham were unable to continue their winning streak in the last game against Wigan Athletic but the team has been impressive in the recent games with seven wins out of the eight. However, things are getting desperate for Morecambe who played their consecutive fifth game without winning in the last duel. The Shrimps lost five of the last seven away games and the next trip also seems a tough challenge for them. Two of the last three H2Hs also witnessed the Millers as a winner. So the victory for the hosts would be our first pick for this match

Despite getting the perfect results in the recent games, Rotherham United have been unable to collect a huge number of goals. The Millers have scored five goals in the last five attempts, conceding only one. The Shrimps are also averaging only one goal per game from the last three outings. So there are high chances to see a low-scoring total in this game

The defensive line of Rotherham has been at its prime in the recent games that secured five clean sheets in the last six games. While the attacking line didn’t miss the target in the last eight games. But on the other hand, Morecambe failed to score in two of the last four away games. So we can expect the hosts to continue their defensive form and win the game with a clean sheet. The last meeting of the teams followed the same pattern.

The six-match winning streak of the Millers came to an end in their last game where they drew 1-1 against Wigan Athletic. But the team has quite an easy task ahead to strengthen their first position on the table. Adding more, Rotherham hold an amazing sequence of 18 unbeaten home games. The club boss Paul Warne has a completely healthy squad ahead of this game.

The Shrimps are going through the rollercoaster ride of draws and defeats from the last five games and drew the last duel by 1-1 against Gillingham. Morecambe have managed only seven victories in the 32 games of the season so far and a long run of defeats have sent them to twenty-first place in the standings. The manager Stephen Robinson has all players available for the selection.

Looking for the best odds for Rotherham vs Morecambe? We’ve got you covered. Check out our list of odds from the popular bookies and a few important stats to help you make a good prediction.

FAQ about Rotherham vs Morecambe 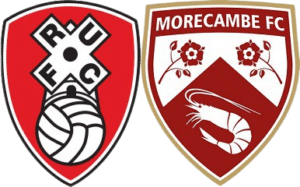 Where is the game being played? Aesseal New York Stadium.

Who is the bookmaker’s favourite to win? Rotherham United.