Rangers remain locked in a title fight with their city rivals, Celtic. Can they take the points here? Find out with our Rangers vs Aberdeen preview here along with the predictions and free tips we mention along the way.

Rangers to win without having it all their own way

Rangers have dominated Aberdeen in recent years; they have no losses in their last 10 meetings with Aberdeen, with seven wins and three draws. The Gers have also enjoyed a good run of form recently; they are unbeaten in their last eight games across all competitions. In contrast, Aberdeen have found it difficult to win games since the start of the year: they are without a win in their last nine games. Considering Aberdeen scored in seven of their last eight games, coupled with the fact that Rangers conceded in four of their last five games; we should expect goals at both ends, with Rangers taking all the points.

Both teams will be amongst the goals

We’ve mentioned that Aberdeen found the back of the net in seven of their last eight games; we should also point out that they have not done a very good job defensively. Aberdeen conceded in all of their last nine games; they kept just one clean sheet in their last 13 games across all competitions. Similarly, Rangers have conceded their fair share of goals recently; they kept just one clean sheet in their last five games, conceding seven goals in that stretch. Conversely, it has not been easy to defend the Gers; they scored in 30 of their last 31 games. Both teams scored in four of Rangers’ last five games, and in seven of Aberdeen’s last eight games; on that note, both teams should score.

Clashes between these two have mostly been high-scoring games; four of their last five meetings went above the 2.5 goal margin, with three of those games going over 3.5. It’s fair to point out that Rangers have been one of the highest scoring teams in the Premiership; they scored 20 goals in their last eight games alone. Most of Rangers’ games have been on the high-scoring side; four of their last six games went over 2.5. With this in mind, we should expect a few goals in this game.

The best odds for Rangers vs Aberdeen

Rangers are coming off a 1:0 win at St Johnstone; they are unbeaten in their last eight games, with five wins and three draws. The Gers will look to put pressure on league leaders Celtic by winning this game; all eyes will be on Alfredo Morelos.

Despite hiring Jim Goodwin from St Mirren, Aberdeen’s luck hasn’t changed much; they have no wins in their last nine games across all competitions. Jim Goodwin will hope to redeem himself as his side take on one of the best teams in the country; Christian Ramirez will be the man to keep an eye out for.

The final word on Rangers vs Aberdeen 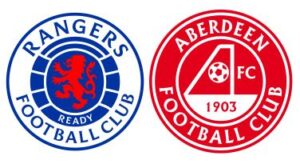