Free Match Tips from Punditfeed for Partick Thistle vs Fraserburgh

The club-friendly defeat to Motherwell will not deter Partick Thistle. They enter Round 3 with the marker on their back and will want to get back to winning ways against Fraserburgh in the Scottish League Cup.

Partick Thistle has put everyone on their toes with two wins from their two League Cup outings. Premiership outfit, Kilmarnock succumbed against them on penalties in their last outing and they will want a win against Fraserburgh to claim pole position. They did show signs of weakness against Motherwell in their club-friendly meeting but should have enough in the tank to get over the line against the Broch.

Partick Thistle’s job was to contain Kilmarnock and they completed the task with flying colours. In Fraserburgh, they have a team struggling for form and fitness. The Broch have conceded 10 goals in their three League Cup outings and this tally is set to increase as they travel to Firhill Stadium. With Partick’s meeting with fellow lower division outfit Stenhousemuir finishing with Over 2.5 Goals, we are expecting a similar result in this meeting.

In their home fixtures, Fraserburgh gave a decent account of their abilities, getting on the scoreboard in losing outcomes. On the road, it was tough for them against Stenhousemuir as they were shut out in a 3-0 defeat. We expect a similar result for them as Partick will be buoyed after their impressive defensive performances against Kilmarnock and Motherwell.

Ian McCall will be pleased with the performances of Partick Thistle in the League Cup. The Magyars are unbeaten in the competition, getting over the line against Kilmarnock in a penalty shootout. The fact that the win was secured on the road would have been a welcome as they eye pole position in Group B.

Being competitive in the League Cup was always going to be an uphill task for Fraserburgh. The Broch are divisions below everyone in their group and the disparity in quality has shown in their three defeats. Their rivals have had a field day at their expense, while they have little to show for their efforts.

Looking for the best odds for Partick Thistle vs Fraserburgh? We’ve got you covered. Check out our list of odds from the popular bookies and a few important stats to help you make a good prediction.

FAQ about Partick Thistle vs Fraserburgh 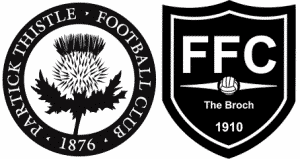 When is the kick-off time? The match will be played on July 19, at 20:45 GMT.
Where is the game being played? Firhill Stadium (Glasgow).
Who are the players to watch? Aaron Muirhead (Partick Thistle) and Sean Butcher (Fraserburgh).