Oxford will be facing Sheffield Wednesday on the 22nd of January, and today, we will suggest the best tips and predictions for their upcoming match on Saturday. For more League One odds and tips, check out our latest articles.

Top Predictions, Odds, and Free Tips for Oxford vs Sheffield Wednesday on Saturday

Below, you can check out the latest predictions and tips for the Oxford vs Sheffield Wednesday fixture we came up with after reviewing all the data.

These odds are all from Ladbrokes and are subject to change. Make sure to double-check them before wagering on them.

Oxford seems to be in the better position out of the two teams because not only are they ahead of Sheffield Wednesday in the rankings, but they is also a three-point difference between these teams. Oxford won two of the last three head-to-head games between them and Sheffield Wednesday and they have the home-field advantage this weekend. We think that would be enough for them to beat their opponents.

Sheffield Wednesday seems to be hovering around the eighth position for a couple of weeks now and they are only three points behind Oxford. If they win here, which we don’t think so, they could catch up to them in the table rankings. They still have only one injured player on the roster – Lewis Gibson.

Oxford will most likely win the match against Sheffield Wednesday because they have already done it once last October. They don’t have any injuries or suspended players, which will be to their advantage this weekend because they will have a full squad to choose from.

In these tables, you can see the latest statistics and odds for the upcoming Oxford vs Sheffield Wednesday match on Saturday.

Questions and Answers Regarding Saturday’s Oxford vs Sheffield Wednesday 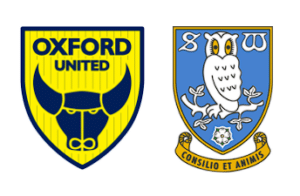