Check out what we have for you regarding the Oxford vs Rotherham League One fixture this weekend, and see if you like any of the odds and predictions we recommended for the fixture.

Free Betting Tips for Oxford vs Rotherham on Saturday

Below, you can see our betting experts’ top free predictions and betting tips for the upcoming Oxford vs Rotherham fixture this weekend.

All odds are from Ladbrokes and are subject to change. Double-check your bet slip before continuing.

Three of the last five matches that both teams played in League One all ended similarly with both teams scoring goals. We think that Saturday’s outcome won’t be any different with eleven out of the thirteen head-to-head games between them (ever) ending with a BTTS outcome, as well.

Rotherham has the upper hand when it comes to playing against Oxford because they won two of the last three head-to-head matches against them. They are also currently heading the table with thirty-seven points, while Oxford is trying to get to the playoff positions with their thirty-one points. Surprisingly, both teams’ recent form consists of four wins and a draw, but Rotherham is our favorite in this match-up.

Looking back at the past head-to-head matches between Oxford and Rotherham we are seeing a pattern – out of the thirteen matches they played together in history only one ended with fewer than 2.5 total goals scored. Also, three of the last five matches both teams played in League One ended with over 2.5 total goals, like most of Oxford’s matches this season.

In these tables, you can check out the latest match statistics ad odds for the Oxford vs Rotherham fixture.

Injuries, Suspensions, and Latest Team News for Oxford vs Rotherham

Two of Oxford’s players are at risk of suspension with four yellow cards each – Alex Gorrin and Steve Seddon. Other than that, there aren’t any injured or suspended players on the team. We don’t expect Oxford to win the match even though their recent form has been one of the best in the league. that’s because their recent history against Rotherham and their position in the table show otherwise.

For Rotherham, there aren’t any injured or suspended players, but Oliver Rathbone is at risk of suspension with four yellow cards. Rotherham is the favorite here and they will be that more eager to keep their first position, now that they climbed there. 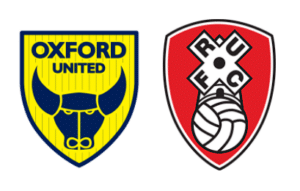