Motherwell suffered a home defeat in the week. Can they bounce back with a win here? Find out with our Motherwell vs Dundee preview here along with the predictions and free tips we mention along the way.

Motherwell have not exactly enjoyed the best form recently; they’ve won one, drawn two and lost one of their last four games. However, Motherwell will be going up against the worst road team in the Premiership. Dundee have played 14 games away from home this season, and they’ve lost 10 of them; they’ve won just two of those 14 road games. Additionally, Dundee tend to struggle whenever they visit Motherwell; they lost their last four trips to this stadium, and they have no wins in their last five visits. With this in mind, we’re predicting a win for Motherwell.

Backing goals at both ends

This is more of a both teams to concede pick, rather than both teams to score. Motherwell have not been able to keep the goals out; they allowed at least one goal in all of their last eight games. Conversely, The Well scored their fair share of goals recently; they scored five goals in their last four games. Both teams found the net in three of Motherwell’s last four games. Just like Motherwell, Dundee have not been very good defensively, especially recently; they conceded seven goals in their last three games. Also, Dundee scored in four of their last six games, with eight goals scored in that stretch. On that note, both teams should find the back of the net.

A game with goals

Dundee FC have scored and conceded a lot of goals recently; as a result, their games have mostly been on the high-scoring side. Five of Dundee’s last six games went above the 2.5 goal line. Also, meetings between these sides have seen a lot of goals; three of their last five encounters went over 2.5. It’s fair to point out that those five meetings saw three goals scored per game on average. For this reason, we believe that there will be at least three goals in this match.

The best odds for Motherwell vs Dundee

Motherwell’s woes continued with a 1:0 loss at home against Ross County a couple of days ago; they are now without a win in their last nine league games. The Well will hope to put an end to that unwanted streak; will Kevin Van Veen fire his team to victory?

Dundee FC are coming off a goalless draw against Hibernian; despite being a man up for over 30 minutes, they couldn’t capitalize on that advantage. Dundee have no wins in their last three games; Danny Mullen will hope to help the lads take all three points from this game.

The final word on Motherwell vs Dundee 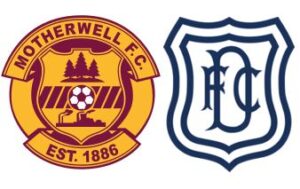