Free Match Tips from Punditfeed for Morecambe vs Shrewsbury

Morecambe aim to find the winning track of home games when they welcome Shrewsbury on the first matchday of League One. The Shrews are also on a lengthy streak of winless games before this game.

Shrewsbury are winless in the last nine games, including six league outings of the last season. The Salop also lost the last three visits of League One in a row. On the other hand, Marcombe are also winless from the last five games but they managed three victories and two draws in the previous six H2H against Shrewsbury. Following the home advantage, the Shrimps will be our favourites to get three points in this game.

Morecambe has found the back of the net only four times in the last five games but Shrewsbury have been even worse. Town scored only one goal in the recent five outings. Moreover, four of the last five H2Hs concluded in low-scoring totals. So we expect the same trend to be followed in this game as well.

Morecambe managed to find the target in four of the last six attempts of their club-friendlies campaign. However, the shrews failed badly in this regard and didn’t score in three of the previous four away outings. The Shrimps also earned two clean sheets in the recent four home H2Hs against Shrewsbury. Hence, we believe to see only Morecambe get on the scoresheet at the end of this game.

The Shrimps concluded their pre-season campaign with a draw game of 0-0 against Carlisle in the previous match. Morecambe ended at the nineteenth position in the last season of League One. The team manager Derek Adams will have zero fitness issues in the team before this game.

The Shrews were clipped to a 0-0 draw at home in the last game against Cardiff. Shrewsbury also lost four of the last six games of League One last season, ending the campaign in the eighteenth position on the points table. All of the players will be ready to make an appearance in this game without any fitness or suspension issues.

Looking for the best odds for Morecambe vs Shrewsbury? We’ve got you covered. Check out our list of odds from the popular bookies and a few important stats to help you make a good prediction.

FAQ about Morecambe vs Shrewsbury 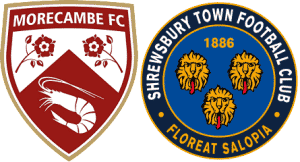 When is the kick-off time? The match will be played on July 30, at 16:00 GMT.
Where is the game being played? The Mazuma Stadium (Morecambe).
What was the last H2H result? Shrewsbury won with a 5-0 scoreline.