Morecambe will be facing MK Dons on the 27th of November, and in this article, we will check the fixture out to see the best betting tips and odds. If you want to see more League One odds, you can check out our website.

Let’s check out the best free tips and predictions for the upcoming Morecambe vs MK Dons match this weekend.

All odds you saw above are from Ladbrokes and are subject to change. Make sure to double-check them before continuing.

MK Dons are at the brink of the playoff positions with thirty-one points and three wins out of the last five matches they played. They also won 50% of the head-to-head matches between them, which gives them enough advantage, while Morecambe managed to win only once against them (25%).

Morecambe might have won the last time they hosted a match against MK Dons, but we think that this time it would be different with two of their players out with injuries. Shayon Harrison and Josh McPake are out with ankle injuries for more than six months, so we don’t think they will be coming back anytime soon.

MK Dons have no injured or suspended players on their roster, so they will be playing at 100% on Saturday. They are also in better recent form and at a higher position in the League, One table compared to Morecambe. We expect a high-scoring game this weekend with goals from both sides.

In these tables, you can take a look at the most recent match histories and scores for Morecambe vs MK Dons.

Popular Q&As for Morecambe vs MK Dons on Sunday 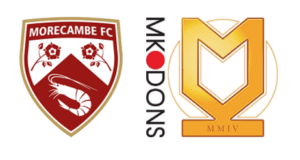