Morecambe will be facing Bolton on the 5th of February and today, we will check out the most popular predictions and free tips for the Saturday match.

Our Predictions for Morecambe vs Bolton on Saturday

Our experts reviewed the fixture and came up with the following free betting tips and predictions for the upcoming Morecambe vs Bolton match.

These odds are from Ladbrokes and are subject to change. Check your bet slip before confirming anything.

Two of the last three times Morecambe hosted a game against Bolton, the match ended with a clean sheet. We think that this weekend’s match also has a high chance of ending the same way. Especially, considering that nine of the last ten games that Bolton played ended without goals from both sides.

Bolton has improved their form recently and they won four of the last five matches they played. The same cannot be said about Morecambe who won only one game out of the last five they played. Also, Morecambe is currently getting relegated with twenty-eight points, while Bolton is in the mid-table region with thirty-eight points. Morecambe has never won a match against Bolton in any league (club-friendly gamed not counted).

Plenty of matches for Bolton ended with under 2.5 total goals recently, including four of the last five fixtures they played. If we look at the head-to-head games between the two teams, we will see something similar with three of the last four matches ending that way. Likely, Saturday’s game will also end the same way.

Although Morecambe will be facing their opponents with a full squad with no injured or suspended players, we don’t think they would be able to beat them. Their recent form shows that they are struggling to escape relegation and aren’t making any considerable progress.

Bolton has one recorded injury for this weekend – Josh Sheehan who won’t be able to play until the end of May this year because of a cruciate ligament injury. That won’t stop them from beating Morecambe especially since they are on a roll with four wins in a row.

Morecambe vs Bolton: Statistics and Recent Form of Both Teams

Make sure to review these statistics for the Morecambe vs Bolton fixture this Saturday.

Popular Q&As for Morecambe vs Bolton on Saturday 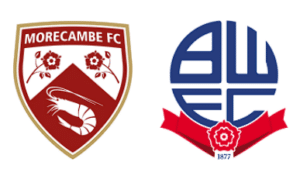