Free Match Tips from Punditfeed for Montrose vs Stenhousemuir

The Scottish League Cup pits together Montrose and Stenhousemuir in Group B. Both sides will be fighting for bragging rights at Links Park as they look to inch closer to group leaders Kilmarnock.

Kilmarnock did not give Montrose room to breathe as they were routed 0-3. On the other hand, Stenhousemuir earned a 3-0 win over Fraserburgh. It is the visitors who have the form on their side but will not be confident in their chances. The Gable Endies have won seven of their last ten duels and are unbeaten at home against them. With home advantage on their side and after learning mistakes from their defeat to Kilmarnock, expect Montrose to claim the three points on offer.

Matches in the League Cup have shown that both Montrose and Stenhousemuir can score regularly. Both set of fanbases will be nervous about their defensive dispositions as evidenced by their combined seven goals conceded in their respective cup outings. Interestingly, each of their cup outings has concluded with an Over 2.5 Goals scoreline and we expect this trend to continue at Links Park.

Five of the last seven duels between these sides have seen a shutout for one or the other. As they meet in their bid for second place in Group B, we see a change in the trend. Both sides are still struggling with preseason jitters. Kilmarnock exposed Montrose while Partick Thistle did the same for Stenhousemuir. As both sides take the pitch with more settled squads, expect them to exchange blows in search of glory.

Terry Masson’s captained Montrose to a 0-3 defeat against Kilmarnock. Alongside Stewart Petrie, he was left wondering what the Gable Endies could have done more against their Premiership rivals. Against Stenhousemuir, they will be cautious but have the confidence against a side who they have normally beaten with ease.

Stephen Swift showed that Ochilview Park is their fortress with a 3-0 win over Fraserburgh. They will want a similar result against Montrose but have an uphill battle on their hands. They have only won once in their last 16 trips and that too was back in November 2008. All eyes will be on Will Sewell, who opened the scoring against Fraserburgh.

Looking for the best odds for Montrose vs Stenhousemuir? We’ve got you covered. Check out our list of odds from the popular bookies and a few important stats to help you make a good prediction.

FAQ about Montrose vs Stenhousemuir 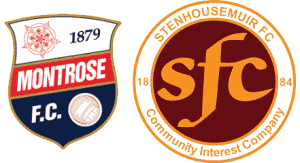 When is the kick-off time? The match will be played on July 19, at 20:45 GMT.
Where is the game being played? Links Park.
What was the last H2H result? Montrose won with a 3-0 scoreline.