Let’s go over the best predictions and tips for the upcoming MK Dons vs Lincoln fixture this weekend. If you want to see more of our League One predictions, you are welcome to check out our website.

Our Predictions and Betting Tips for MK Dons vs Lincoln

Here is what we think about the MK Dons vs Lincoln match on Saturday and the top free tips we got for you.

These odds are all from Ladbrokes and are subject to change. Before wagering, make sure to double-check your bet slip.

MK Dons faced Lincoln in December last year and beat them with a one-goal difference. We think that this Saturday’s history will repeat itself. MK Dons won four of the last five matches they played and they have fifty-two points for the whole season. On the other hand, Lincoln is twenty-one points behind them in the League One table and they lost two of the last three games they played.

We looked over the past head-to-head games between MK Dons and Lincoln and four that four of the last five ended with more than 2.5 total goals scored. Also, Lincoln played a lot of high-scoring games with three of the last four matches ending with over 2.5 total goals. For MK Dons, more than half of the games they played during the season ended similarly.

Final Predictions and Injury News for MK Dons vs Lincoln

Lincoln is lucky to not have any injured or suspended players on their roster, but we don’t think they would beat MK Dons especially with the point difference between the two teams being so big and their latest failure against them being a little over a month ago.

MK Dons don’t have any active suspensions right now and no injuries on the roster. We think that they would win because their form shows promise. They are also the host in the game, which will give them a confidence boost.

Here are the previous match histories and stats for MK Dons vs Lincoln on Saturday. 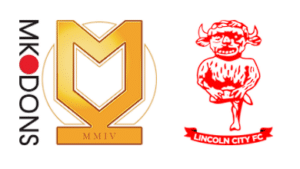