The Ladbrokes odds were correct at the time of writing.

Both teams started the season with a loss. Who will take the three points in this very interesting clash on the 6th of August?

Find out what the experts predict for Mansfield Town vs Tranmere Rovers. Spoiler alert – neither side will be happy with the outcome.

This one we consider to be one of the easiest predictions. Both sides are performing very poorly in attack so we expect them to approach this game with a defensive mentality. In four of the last 10 games, the result after 45 minutes of play was a draw. The most common outcome of this game is also the draw. Tranmere Rovers had 12 draws last season while Mansfield Town had 11.

Mansfield Town Or Tranmere Rovers Will Not Score

This clash is notorious for the lack of goal-scoring opportunities in the games. The most common result we’ve seen from the Mansfield Town vs Tranmere Rovers rivalry is the goalless draw. Seven of the last 10 games ended with two or fewer goals being scored. Mansfield Town had a somewhat decent defense last season and if they can keep up that rhythm then a clean sheet on the 6th of August is to be expected.

Tranmere Rovers have no right to be happy with the first League Two game. Tranmere Rovers lost with a 1:2 result against the visiting team Stevenage and the truth is that Stevenage was the better of the two teams. Lovely strikes by Jake Reeves and Jordan Roberts broke all hopes for Tranmere Rovers in that game.

Make sure to check out our charts. They contain key insight into the betting odds and head-to-head statistics between Mansfield Town and Tranmere Rovers: 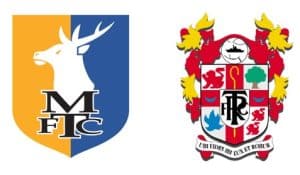