St Johnstone are having a torrid campaign and sit rock bottom of the Premiership table. Can they grab just a fourth win of the season here? Find out with our Livingston vs St Johnstone preview here along with the predictions and free tips we mention along the way.

Livi to take the points

St Johnstone have been by far the worst team in the Premiership this season; they are on a 12 match winless streak, with 10 wins and two draws. On the other hand, Livingston have been playing well recently; they’ve won three of their last four games in all competitions. It’s worth noting that St Johnstone have won just two of 10 road games this season; they’ve lost six of the 10 games they’ve played away from home. Livingston won the reverse fixture by a comfortable 3-0 score line; and on that note, we believe they’ll beat St Johnstone at home.

St Johnstone have been the lowest-scoring team in the Premiership this season; they’ve scored just 11 goals in 22 league games. It’s even more interesting that nine of those 11 goals were at home; St Johnstone have scored just two goals in 10 road games this season. Due to their lack of goals, St Johnstone’s games have mostly been low-scoring; seven of their last nine games went under 2.5. In like manner, Livingston have had their fair share of low-scoring games; as eight of their last 10 games went below the 2.5 goal line. For these reasons, we believe that this will be a low-scoring affair.

The best odds for Livingston vs St Johnstone

Livingston rebounded from their loss to Rangers by defeating Hibernian last weekend; they now have three wins in their last four games. David Martindale will be eyeing his side’s fourth win in five games as St Johnstone come calling; he’ll hope he can rely on Bruce Anderson to deliver the goals.

Things have not been going too well for St Johnstone over the past few months; they are winless in their last 12 games across all competitions. Callum Davidson will hope to snap his side’s rotting streak as they take on Livingston; will Chris Kane fire his team to victory?

The final word on Livingston vs St Johnstone 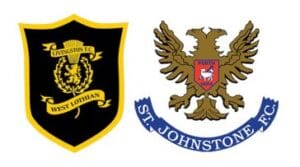