Just three points separate these sides in the Scottish Premiership table. Can Livi pull level with their visitors with  a win here? Find out with our Livingston vs Aberdeen preview here along with the predictions and free tips we mention along the way.

Aberdeen to take the points

Dons will open the scoring

We have already established that Livingston do not play well against Aberdeen; they have won just one of the last 13 clashes between these sides. We would also like to add that Aberdeen have a tendency to score first whenever they play against Livingston; The Dons have drawn first blood in nine of those 13 encounters. In the same vein, Livi have a tendency to start slow, and as a result, they usually concede first; they conceded the first goal in five of their last seven games. With all of this in mind, Aberdeen should bag the first goal.

Finally, we will take a look at the over/under goals market; both teams have been involved in a lot of low-scoring games. Eight of Livi’s last 11 games in all competitions went under the 2.5 goal line. Similarly, Aberdeen’s most recent games have not seen a lot of goals; as five of their last seven games went under 2.5. On that note, we’re predicting a low scoring game.

The best odds for Livingston vs Aberdeen

Livingston have had mixed results over the past month; they’ve won three, and drawn three of their last six games. Dave Martindale’s men are coming off a loss against last-placed St Johnstone; will Bruce Anderson help them bounce back from that disappointing loss?

Aberdeen have had a couple of disappointing games recently; they have no wins in their last two games, and have scored just once in those two games. Stephen Glass’ men will hope to get back to winning ways as they take on Livingston; all eyes will be on Christian Ramirez.

The final word on Livingston vs Aberdeen 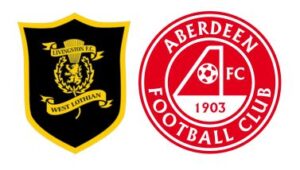