In this article, we will check out the most popular predictions and free tips for the upcoming Lincoln vs Doncaster fixture. For more League One betting tips, you can check out our website.

Latest Odds and Match Predictions for Lincoln vs Doncaster

Below, you can check out the betting tips and stats our team of experts came up with regarding the Lincoln vs Doncaster fixture.

All odds are from Ladbrokes and are subject to change. Make sure to check your bet slip before placing any bets.

When comparing the number of clean sheets compared to the number of BTTS games recently involving both teams, we saw that the clean sheets were more. Three of the last five matches for both Lincoln and Doncaster ended with under 2.5 total goals scored. Also, all three of the matches that both teams played against each other this and last year ended similarly.

The last time Lincoln and Doncaster faced each other was in November this year and the match ended with a draw. We think there is a high chance of history repeating itself because both teams lost three of the last five matches they played and are currently placed in the lower half of the table.

Both Lincoln and Doncaster have had more low-scoring games during the season with twelve of the twenty-one fixtures they each played, so far, ending with under 2.5 goals. That includes three of the last five matches both clubs played. Also, three of the last four head-to-head fixtures between them ended with over 2.5 total goals.

Lincoln is placed higher in the League One table with twenty-two points, but the recent three losses in a row are serious increase their chances of dropping to a lower position. They don’t have any injured or suspended players, but one of their men is at risk of suspension with four yellow cards. Also, two of the last five gamed the team played ended in a tie.

Although Doncaster has won four of the last five matches they played against Lincoln, we don’t think they would win on Saturday. Mainly because the last time they faced Lincoln the match ended with a draw, and three of their last five matches were lost in a row. Doncaster is also six points behind Lincoln in the League One table.

Match Statistics and Latest Scores for Lincoln vs Doncaster

Here, you can check out the most recent match histories and team form for Lincoln vs Doncaster on Saturday.

Prevalent Q&As for Lincoln vs Doncaster on Saturday 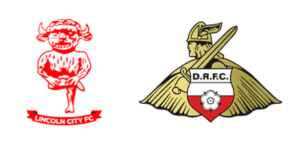