Kelty Hearts go up against Albion Rovers at the home stadium for their second fixture of the Scottish League Cup. Both teams enter this game after back-to-back winless games.

Kelty Hearts are yet to win in the last two games and registered only two wins in the previous five outings of different competitions. However, Albion Rovers seem more desperate who have lost consecutive games of the League Cup. The Wee Rovers are also winless in all of the H2Hs against the Hearts, losing all of the visiting three. Kelty Hearts are struggling for a win at their home stadium but we expect a comeback for them with the addition of three points at the end of this game.

All of the three H2Hs at the home of the Jambos witnessed high-scoring totals and Kelty Hearts scored 12 goals in that duration. The hearts have also added a total of eight goals in the last five attempts. On the other hand, Albion Rovers also found the target seven times in the previous five away games. The Wee Rovers also leaked five goals in the previous two attempts. Hence, we believe this game to end with a total of over 2.5 goals.

Despite not having a positive sequence of results recently, Albion Rovers have confirmed their name on the score sheet in all of the last five outings, keeping only one clean sheet. The hearts have missed the target twice in the same duration but we see them having several chances over the home advantage. Kelty Hearts hit the target in all of their hosting games against the Wee Rovers. Therefore, we give our next predictions in the favour of a BTTS outcome.

The Maroon Machine extended their winless string of home games in the last duel against Inverness with a 1-0 defeat. After playing that only game, Kelty Hearts are at fourth place due to the GD points difference with Albion Rovers. The team manager John Potter will have zero injury issues in the squad before this game.

The Wee Rovers lost their consecutive second home game of the League Cup in the last game against Cove Rangers. After getting an awful start, Albion Rovers are at the last of the table in Group G. The 52-year-old gaffer, Brian Reid doesn’t have any medical concerns in the team to report coming into this game.

Looking for the best odds for Kelty Hearts vs Albion Rovers? We’ve got you covered. Check out our list of odds from the popular bookies and a few important stats to help you make a good prediction. 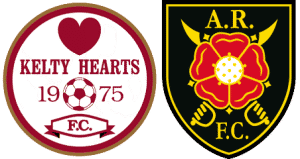 When is the kick-off time? The match will be played on July 16, at 16:00 GMT.
Where is the game being played? New Central Park.
What was the last H2H result? Kelty Hearts and Albion Rovers played a 0-0 draw.