In this article, we will check out the upcoming match between Wycombe and Ipswich, which will be on the 26th of December. Below, you can find out everything you should know about the event.

Our betting experts reviewed the fixture and came up with the following match predictions for it. If you want to find more League One odds and tips, you can check out our website.

All odds are from Ladbrokes and are correct at the time of writing. Make sure to double-check your bet slip before continuing because all odds are subject to change.

Wycombe’s recent form and their position in the League One table are considerably better than Ipswich’s form. Wycombe won or drew all five of their most recent matches while Ipswich lost or drew four of the last five matches they played in League One. Wycombe still hasn’t won a match against Ipswich, but this is the perfect time for them to do so because of both teams’ recent form.

Throughout the season Ipswich and Wycombe played a lot of high-scoring matches. For Wycombe, thirteen of the twenty-two fixtures they played this season ended with over 2.5 total goals, including four of the last five they played. Ipswich also had a lot of over 2.5 goal games this season with fifteen of the twenty-three games played during the season-ending with more than 2.5 goals. Also, the last time they played together in November the match ended with five goals scored.

Match Conclusion and Latest Injuries for Ipswich vs Wycombe

When it comes to the Wednesday match, we think that Wycombe would be the likely winner because of their recent form. Even though Wycombe hasn’t beat Ipswich before, their chances this week are high. There are no injured players for either of the teams, but George Edmundson from Ipswich is out with a yellow card suspension. There is also a high chance that the match will end with more than 2.5 total goals scored from both sides of the pitch.

In this section, you can check out the latest match statistics and bookmaker odds for the upcoming Ipswich vs Wycombe fixture.


Prevalent Q&As for Ipswich vs Wycombe on Wednesday 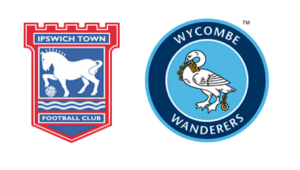