Ipswich and Plymouth both have playoff ambitions but only Ipswich’s will be ended if they don’t win this match. Can the home side get three points to keep the feint hopes alive for another week? Find out with our Ipswich vs Plymouth preview here along with the predictions and free tips we mention along the way.

Plymouth have won each of their last six games but we see them dropping points here. We believe this game will end level. Plymouth’s good form of late has largely been underpinned by home games; away from home things are exactly win, win, win with just five wins in their last 10 road games. Ipswich meanwhile are pretty good at home; their previous 10 home matches have seen them go unbeaten with five draws and five wins. You couldn’t bank on either losing this match hence we see a draw coming up.

Both of these teams tend to serve up low scoring matches. Ipswich have seen seven of their previous 10 home matches fall under the three goal mark. In that time there have only been a total of 16 goals seen – that’s just 1.6 per match. As for Plymouth, nine of their last 10 have been under 2.5. Their average is just 1.8 goals. Three of the past five head to head meetings have ended on the low scoring side too with an average of 2.1 goals.

We might see this game being a low scoring one but that doesn’t mean we won’t see any goals; there will be plenty of quality on display. Front and centre of that may well be Ipswich man Wes Burns. Burns has been on fire lately; his last seven games has seen him chip in with three goals and three assists. It’s by far the most productive season of his career and he will be riding a confidence wave as a result. We fancy him to get amongst the goals again here.

The best odds for Ipswich vs Plymouth

Ipswich have improved by a huge amount since Kieran McKenna took over but despite strong form they are in danger of not making the playoffs. Wes Burns has been immense of late but they could do with Macauley Bonne finding his early season form again. At the other end, George Edmundson remains out.

Plymouth are looking good for a top six finish owing to their current position and form. That said, they will want to keep momentum strong as the season end nears. 16 goal striker Ryan Hardie will likely be key here against a defence that doesn’t give much away.

The final word on Ipswich vs Plymouth 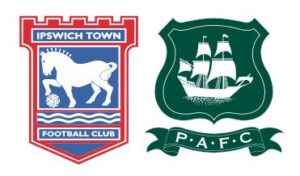