Both of these sides are having alright seasons with the duo both in the top half. If the league was based on home form only then Hearts would be top. Can they keep that form going here? Find out with our Hearts vs St Mirren preview here along with the predictions and free tips we mention along the way.

Despite Hearts’ recent struggles, they are one of three teams that are unbeaten at home this season. The Jam Tarts have won three of their last four home games; they’ve scored 11 goals and conceded just three in that four game stretch. Hearts also tend to play well whenever St Mirren come visiting; they haven’t lost at home to St Mirren since 2013. As a matter of fact, St Mirren have won just once at this stadium in the last 10 years. St Mirren have struggled a lot recently, they are on a five match winless streak. For this reason, we’re backing Hearts to win.

Don’t bank on loads of goals

Encounters between these sides have mostly been on the low-scoring side; four of their last six meetings have gone under 2.5. St Mirren have not only had some trouble winning games, they’ve also had trouble scoring goals. Jim Goodwin’s men have managed just one goal in their last three games, with those three games all going under 2.5. In the same vein, Hearts have been involved in a lot of low-scoring games; as five of their last seven games have seen less than three goals scored. We shouldn’t expect too many goals in this game.

Our final pick for this game will be on the BTTS market. Hearts have had one of the best defences in the league, especially at home; The Jam Tarts have kept three clean sheets in their last five home games, conceding just three goals. On the other hand, St Mirren have had some tough luck in front of goal; the Saints have failed to score in two of their last three games, they’ve scored just once in that three game stretch. We think at least one side will blank today.

The best odds for Hearts vs St Mirren

Hearts have been going through a rough patch lately; after going unbeaten in their first 11 games, they’ve now lost two of their last three. The Jam Tarts will hope to get back to winning ways as St Mirren come visiting; Robbie Nielson will hope he can count on Liam Boyce today.

Just like Hearts, St Mirren have struggled a bit of-late; they are without a win in their last five games. Jim Goodwin’s men will be eyeing a win as they visit Tynecastle Park; Eamon Brophy will lead the line for the Saints.

The final word on Hearts vs St Mirren 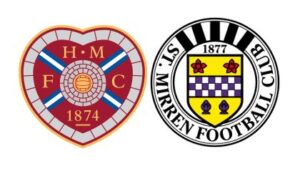