Rangers have officially lost their league title. Now their focus turns to trying to lock down a starting spot in the Europa League final. Will that incentive be enough for them to put Hearts to the sword? Find out with our Hearts vs Rangers preview here along with the predictions and free tips we mention along the way.

Hearts have met Rangers three times this season, and those encounters did not go well for them; they managed just a draw in those three meetings, with two losses. It’s important to note that Hearts lost their last two games, and have no wins in three games. In contrast, Rangers have had a pretty good run recently; they have won seven of their last nine games, including all of their last three. Considering the form of both teams, we’re making the prediction that Rangers will win this match.

These are two of the highest scoring teams in the Premiership; only league champions Celtic have scored more goals than Rangers and Hearts this season. Because of their goal scoring ability, these teams have been involved in a lot of high-scoring games. Five of Hearts’ last six games went above the 2.5 goal mark, six of Rangers’ last nine games too. With this in mind, we believe that these teams will score at least three goals between them.

The best odds for Hearts vs Rangers

Things have not been going too well for Hearts lately; they are coming off consecutive losses against Motherwell and Celtic, and have no wins in their last three games. The Jam Tarts will hope to halt their unwanted streak as Rangers come visiting; it’ll be interesting to see how they’ll fare with Liam Boyce leading the attack.

Rangers have been on fire recently; they are coming off three consecutive wins, and have won seven of their last nine games in all competitions. The Gers will look to extend their winning streak to four games as they prepare for the Europa League and Scottish Cup finals; all eyes will be on Alfredo Morelos.

The final word on Hearts vs Rangers 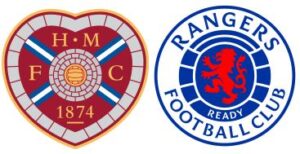