Rangers have been in good form since their managerial change. Can they keep the good run going when they visit Hearts? Find out with our Hearts vs Rangers preview here along with the predictions and free tips we mention along the way.

Hearts have been one of the best home teams in the Premiership this season; they are one of three teams that have not lost at home this season. The Jam Tarts have five wins and three draws from eight home games so far; they’ve also had good results against Rangers recently. Hearts have no losses in their last three meetings with Rangers, and they’ve won two of those encounters. There’s also the issue of fatigue; Rangers will be playing their seventh game in three weeks, they have some tired legs. For these reasons, we’re making the prediction that Hearts will not lose at home.

These are some of the highest scoring teams in the league; Only Rangers and Celtic have scored more goals than Hearts in the Premiership this season. Six of Rangers’ last seven Premiership games went over 2.5, with four of those games going over 3.5. Clashes between these sides have mostly been on the high-scoring side too; eight of their last 11 encounters went above the 2.5 goal line. Hearts have averaged 2 goals per game at home, while Rangers have averaged 2.4 goals per game on the road; on that note, we should expect some goals here.

Finally, we’ll take a look at the BTTS market. Hearts have not had too much trouble finding the back of the net, especially at home; they’ve scored in seven of their eight home games this season. Similarly, Rangers have been really efficient when it comes to scoring goals; they’ve scored in all of their last 14 games across all competitions. We would like to point out that both teams have found the net in eight of Rangers’ last 11 games; considering both teams have scored in seven of the last 11 meetings between these two, both teams should score here.

The best odds for Hearts vs Rangers

Hearts vs Rangers: Meet the teams

Hearts have had some mixed results recently; they have won three of their last six games whilst losing the other three. Robbie Nielson’s men will hope to string up consecutive wins for the first time in two months; it’ll be interesting to see if Liam Boyce will fire his team to victory today.

Rangers have been the best team in the country; they have no losses in their last four games, and have lost just once in their last 14 games. The Gers will look to extend their unbeaten run to five games as they take on Hearts; they’ll hope they can count on Kemar Roofe to lead the lads to victory.

The final word on Hearts vs Rangers 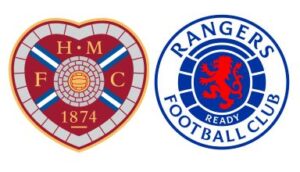