Hearts are flying up in third but Livingston are having a pretty solid campaign too. Who will win when they meet? Find out with our Hearts vs Livingston preview here along with the predictions and free tips we mention along the way.

Hearts have been one of the best home teams in the Premiership this season; they’ve played 15 home games, and won nine of them, with three draws and three losses. The Jam Tarts have also enjoyed some good form recently; having won three of their last four matches, with no losses in that stretch. To be fair, Livingston lost just one of their last four games; however, they tend to struggle against Hearts. Livi lost their last three meetings with Hearts, and they have no wins in their last seven encounters; for this reason, we’re making the prediction that Hearts will win.

Livingston have been consistent in terms of scoring goals, especially in the Premiership; they found the back of the net in all of their last eight league games. Conversely, Livi have struggled to keep clean sheets; they allowed at least one goal in seven of those eight games. Just like Livingston, Hearts have not had too much difficulty finding the back of the net; as they’ve done so in all of their last five games. It’s also worth noting that Hearts allowed four goals in their last two games alone; considering both teams scored in seven of Livingston’s last eight league games, both teams should find the net.

Finally, let’s have a look at the over/under goals market. Most of Livingston’s games have been on the high-scoring side, especially in the league; Livi’s last three, and six of their last eight league games went above the 2.5 goal mark. On the other hand, Hearts found the net 11 times in their last five games alone; they allowed six goals in those five games, with three of those games going over 2.5. On that note, we believe that this will be a high-scoring affair.

The best odds for Hearts vs Livingston

Hearts advanced to the semi-final of the Scottish Cup with a 4:2 victory over St Mirren; they have no losses in their last four games, with three wins and a draw. The Jam Tarts will be eyeing their fourth win in five games as they host Livingston; it’s worth keeping an eye out for Liam Boyce.

Livingston followed back-to-back wins with a 3:1 loss at home to Celtic; they will be going up against a Hearts team they haven’t beaten in seven previous meetings. Livi will hope to bounce back from that loss by defeating Hearts; it’ll be interesting to see how Bruce Anderson will perform today.

The final word on Hearts vs Livingston 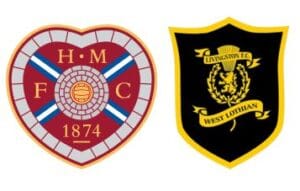