Fleetwood will be facing Rotherham on Saturday, and the away team would give everything they have to keep the first place, but will they be successful? Let’s find out below.

Our Experts’ Predictions for Fleetwood vs Rotherham

Let’s see what our bookmakers think of Rotherham’s next opponent Fleetwood. They will also give the best predictions and tips for the event.

All odds are from Ladbrokes and are subject to change. Make sure to double-check your bet slip before continuing. If you want to see more League One predictions, you can check out our website.

Rotherham is the current table leader of League One with fifty points. They need this win against Fleetwood badly. It happens to be that Rotherham has never won a match against Fleetwood at their home ground, but there is a first for everything. The home team has lost or drew two of the last three games they played in the League, while Rotherham won four of their last five matches.

There have been quite a few high-scoring matches recently and among them are three of the last five head-to-head matches between Fleetwood and Rotherham where they ended with more than four goals scored in total. Fleetwood is also leading the table when it comes to games over 2.5 total goals with eighteen of the twenty-four, they played ending that way. Three of the last five games for Rotherham also ended with over 2.5 total goals.

Will Rotherham Keep Their First Position After Saturday?

Rotherham has a chance to keep their first-place position, but they would have to beat Fleetwood for the first time in history on their home ground. Their recent form is much better than their opponents and there are no injured or suspended players on their squad.

For Fleetwood one player would still be missing due to an injury for half of this year at least – Brad Halliday. There is also a chance that the goal situation in the team ends with over 2.5 total goals and both teams scoring, like three of the last four head-to-head matches between them.

These are the most recent match histories and odds for the upcoming Fleetwood vs Rotherham fixture on Saturday. 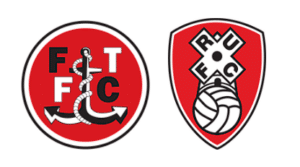