One of the more interesting matches in the upcoming round of League One is the Fleetwood vs Cambridge duel. With that in mind, we have prepared an in-depth preview of the game and some free betting tips for you.

Our top Fleetwood vs Cambridge betting picks and predictions

If you are not sure what is the best bet for the Fleetwood vs Cambridge duel, check our latest betting tips for this game:

Fleetwood and Cambridge to Draw at Half Time

Although Fleetwood is in need of points since they are fighting against relegation, Cambridge is on a three-game winning streak at the moment and they are certainly coming for the win as well.

So, we feel that this game could go either way, so we won’t be guessing who wins the game. Instead, our prediction is for the teams to draw at half time, which they did in their two most recent meetings.

While we aren’t sure who will win this game, we are pretty confident that we will be seeing some goals. After all, the first duel between Fleetwood and Cambridge this season ended with four goals being scored.

In addition to this, both teams have scored in 63% of al Fleetwood in the league so far, while the same thing happened in 56% of all games payed by Cambridge this season. So, both teams to score in this game sounds like a reasonable bet.

After twenty seven rounds have passed in League One, Fleetwood has twenty nine points. That’s far from great and far from enough to keep the team safe from relegation since Fleetwood is currently just two points ahead of the first team in the relegation zone. Fleetwood has two wins, one draw, and two losses in the last five games, which is not bad and if they can do similarly until the end of the season, they should be playing in the same league next year.

With three wins, one draw, and one loss in the last five games, Cambridge has been in good form recently. Overall, the team has 36 points and they are right in the middle of the standings in League One. At the moment, it seems that Cambridge is destined to stay in the mid-of-the-table range, but if they can keep their good form going there is a chance of climbing up.

The latest odds and stats for Fleetwood vs Cambridge

If you want to place a bet on the best Fleetwood vs Cambridge odds, you can find the odds from top bookies on our site.

Frequent questions for Fleetwood vs Cambridge 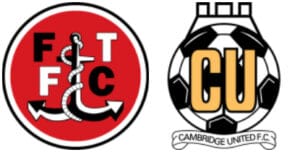