Dundee are having a tough time of things lately but have at least put a couple of wins on the board now. Can they make it number three here? Find out with our Dundee vs Motherwell preview here along with the predictions and free tips we mention along the way.

Motherwell will not lose

Dundee have two wins in their last five games, it’s worth noting that those are their only wins this season. Dundee have been one of the worst home teams in the league; they’ve lost four of their last five home games and have won just once at home this season. Motherwell tend to play well against Dundee; they’ve won nine of the last ten encounters between these sides. As a matter of fact, Dundee have won just once in their last 12 meetings with Motherwell. Considering Motherwell are coming off two consecutive wins, we’re making the prediction that they won’t lose here.

Dundee FC have not been able to keep the goals out; they’ve conceded in eight of their last nine games. It’s important to point out that Dundee conceded first in seven of those nine games. Motherwell, on the other hand, have been consistent in terms of scoring goals; they’ve scored in all of their last five games. The Well have a tendency to start strong; they’ve scored first in four of those five games. We’ve mentioned that meetings between these sides tend to be one-sided; we should also point out that Motherwell have scored first in five of the last seven clashes between these two. For these reasons, we believe Motherwell will draw first blood.

The best odds for Dundee vs Motherwell

Dundee vs Motherwell: Meet the teams

Dundee FC have had mixed results recently, they’ve won twice, drawn once and lost twice in their last five games. James McPake’s men are coming off a 4-2 loss at home to Celtic; they’ll hope to bounce back from that loss with a win today. Paul McMullan is someone you should keep an eye out for.

Motherwell have looked really good recently, they are coming off consecutive wins against Hearts and Aberdeen. The Well sit just three points behind third placed Hearts; they’ll fancy their chances of making it three wins from three. It’ll be interesting to see if Tony Watt will fire his team to victory.

The final word on Dundee vs Motherwell 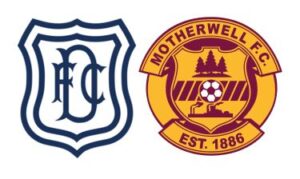