Hearts are not in the title race but they are the best of the rest right now. Can they grab another win here? Find out with our Dundee vs Hearts preview here along with the predictions and free tips we mention along the way.

Both teams have not been playing too well lately, Hearts have won three and lost three of their last six games; Dundee have been relatively worse however, they’ve lost three in a row. Dundee have also struggled in front of goal recently; they’ve failed to score in two of those three games. It’s worth mentioning that Dundee’s manager James McPake has beaten Hearts’ manager Robbie Nielson just once in seven meetings between the two; he has lost four of those encounters, with two draws in between. Hearts have beaten Dundee in three of their last five meetings, losing just once in that stretch; considering Dundee’s losing streak, we believe that Hearts will win.

The best odds for Dundee vs Hearts

Dundee vs Hearts: Meet the teams

Dundee’s played three consecutive road games over the past two weeks, and they’ve lost all of them; they’ll hope to put a stop to their losing streak as Hearts come visiting. James McPake will look to Paul McMullan to help his team get the victory today.

Hearts have had some mixed results over the past month; they’ve won three and lost three of their last six games. The Jam Tarts are coming off a loss, and they’ll hope to bounce back with a win today. It’ll be interesting to see if Liam Boyce will help his team get the win.

The final word on Dundee vs Hearts 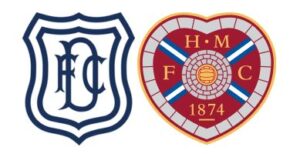