Dundee to win to nil

The bookmakers have this down as a one-sided affair with Dundee easing to victory. Will it play out that way? Find out with our Dundee vs Forfar Athletic preview here along with the predictions and free tips we mention along the way.

Dundee to win and keep it clean

Forfar Athletic have been going through a rough patch; they managed just one win in their last nine games across all competitions. It’s worth noting that Forfar Athletic lost four of their last four games; they’ll be going up against a Dundee side that did not lose any of their last six games. In fact, Dundee have a perfect record in this tournament, with three wins from three; they’ve been really good defensively, allowing just one goal in three group games. All things considered, we are predicting that Dundee will win whilst keeping a clean sheet.

Forfar Athletic have struggled in front of goal lately; they failed to score in five of their last eight games, with four goals scored in that stretch. As a result, Forfar Athletic’s matches usually don’t feature goals at both ends; at least one side blanked in five of their last eight games. In the same vein, we’ve mentioned that Dundee conceded just once in three groups games so far; and with this in mind, we believe at least one of these sides will fail to score today.

Although Forfar Athletic have not scored a lot of goals, they haven’t had much trouble conceding; it’s worth noting that Forfar Athletic conceded in their last six, and 10 of their last 11 matches. In fact, Forfar Athletic allowed 17 goals in their last five games alone; because of the way they concede, their games have mostly been high-scoring. Four of Forfar’s last five games went over the 2.5 goal line, with three of those games going over 3.5; considering six of Dundee’s last eight games saw at least three goals scored, this should be a high-scoring game.

The best odds for Dundee vs Forfar Athletic

Dundee have enjoyed some fine form in recent weeks; they have no losses in their last six games in all competitions, with four wins and two draws. It’s worth noting that Dundee are Group H leaders, with three wins from three; will Luke McCowan help them maintain their perfect record in this tournament?

Forfar Athletic have struggled a lot recently; although they are coming off a win, that was their first win in nine games. In fact, Forfar Athletic suffered four losses in their last five games; it’ll be interesting to see if Joshua Jack can help them get the win.

The final word on Dundee vs Forfar Athletic 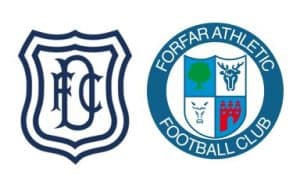