This weekend on the 15th, Crewe will be facing Shrewsbury in an attempt to escape the relegation section of the table. Will they be successful or not? Let’s find out together!

These betting tips and predictions were the product of our betting experts’ hard work on the Crewe vs Shrewsbury fixture. For more League One odds and predictions you can double-check your bet slip for this match.

Shrewsbury has taken their game seriously and managed to climb out of relegation into their current 15th position in the League One table. They have won or drew four of the last five games they played, compared to Crewe who is currently in the 22nd position in the table. Shrewsbury also won three of the last four times they traveled to Crewe, so the match this weekend will most likely end in their favor, as well.

Our Preview of the Crewe vs Shrewsbury Fixture

Crewe isn’t in a good place and they are trying to escape relegation as their opponents managed to, but it isn’t working, so far. They need at least two wins in a row and that is if the two teams above them don’t change their position or points on Saturday. There aren’t any injured or suspended players for Crewe.

Shrewsbury also doesn’t have any injuries or suspended players, but they are in far better form than their opponents. That is why they will most likely win on Saturday. That and the fact they beat Crewe on their home ground three times in a row in recent years.

Head-to-Head Data and Stats for Crewe vs Shrewsbury

Below, you can check out the latest match statistics and bookmaker odds for the upcoming Crewe vs Shrewsbury fixture. 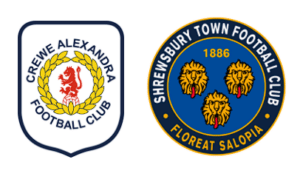