The Cove Rangers vs Dunipace duel is one of the matches scheduled for Saturday in the upcoming round of Scottish FA Cup and we have prepared a preview of this game for you, so check it out.

Our free Cove Rangers vs Dunipace betting tips and picks

If you aren’t sure what is the right bet for Cove Rangers vs Dunipace, check our top betting predictions for the match:

Cove Rangers to Win with Handicap (-2)

There is little doubt about who will win this game since Cove Rangers are currently competing in the Scottish Championship, while Dunipace plays in the sixth rank of Scottish football.

So, the only question is basically what will the difference be at the end. We expect Cove Rangers to dominate the game and beat Dunipace by three or more goals.

We don’t have any h2h stats for this game since these two teams haven’t met in recent years, but we still expect to see many goals in this match, with Cove Rangers doing the scoring mostly.

After all, we already said that we can see Cove Rangers winning the game by three or more goals, so our next prediction is for the game to go over 3.5 total goals. Cove Rangers averaged 3.19 goals per game in the league so far.

Since we expect a convincing win for the home team and plenty of goals, we figured it would be interesting to take a punt at the correct score as well, given the high odds for this betting market.

All things considered, we feel that 4-0 to Cove Rangers is a pretty realistic result given the difference in quality between the two teams and the fact that Cove Rangers will host the game.

Cove Rangers vs Dunipace preview: A hard task for the guests

At the moment, Cove Rangers seems to be in poor form in Championship since they only have one win in the last six games in the league, along with three draws and a couple of losses. Overall, the team has seventeen points from sixteen games, which puts them five points ahead of the relegation zone.

This team plays in the East of Scotland League First Division, which is the sixth rank of Scottish football, which basically means that they are an amateur team. So, we don’t have a lot of information about them or their results, but we can tell you that the team eliminated Broxburn Athletic and Turriff United to get to this stage of FA Cup.

The best odds and useful stats for Cove Rangers vs Dunipace

If you want to bet on the best Hamilton vs East Kilbride odds, take a look at them right here, on our site: 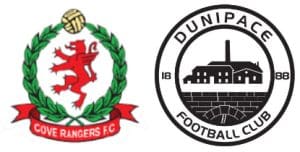