There is very little between these two in the league standings. Who will take the points? Find out with our Coleraine vs Glenavon preview here along with the predictions and free tips we mention along the way.

A double chance on Glenavon

Despite Coleraine’s recent 5:2 win against last-placed Warrenpoint, they have struggled to win games recently. Coleraine won just one of their last seven games; in fact, they lost four of their last five games. On the other hand, Glenavon have been relatively better than Coleraine; they’ve lost just two of their last 10 games across all competitions. It’s worth noting that those two losses came against two of the top three teams in the Premiership. Additionally, Glenavon have no losses in their last five meetings with Coleraine; although to be fair, four of those five encounters ended in draws. Considering both teams’ form, we believe that Glenavon will not lose today.

Both teams to hit the net

Glenavon have had some difficulty keeping clean sheets; they’ve conceded in four of their last five games, with 10 goals conceded in that stretch. Conversely, Glenavon have scored their fair share of goals; they found the net in four of those five games, scoring eight goals. Just like Glenavon, Coleraine have not been able to keep the goals out; they’ve seen their defence breached in all of their last nine games. Like Glenavon, Coleraine have scored their fair share of goals; they scored in six of their last eight games. Both teams scored in six of Coleraine’s last eight, and in three of Glenavon’s last five games; for these reasons, we should expect goals at both ends.

Meetings between Coleraine and Glenavon tend to be on the low-scoring side; all of their last four clashes went below the 2.5 goal margin, with three of those games going under 1.5. As a matter of fact, those four meetings saw under 1 goal scored per game on average. Similarly, Coleraine have had their fair share of low-scoring games, especially in the Premiership; four of their last five league games went under 2.5. On that note, this will likely be a low-scoring game.

The best odds for Coleraine vs Glenavon

Coleraine snapped their four match losing streak with a comfortable 5:2 win against Warrenpoint a couple of days ago; they’ve won just one of their last seven games. Oran Kearney’s men will hope to make it two wins from two; keep an eye out for Matthew Shevlin.

Glenavon have been going through a rough patch the past few weeks; they’ve won just one of their last six games, with three draws and two losses. Gary Hamilton will hope to improve his side’s poor form with a win; it’ll be interesting to see how they’ll fare with Matthew Fitzpatrick leading the attack.

The final word on Coleraine vs Glenavon 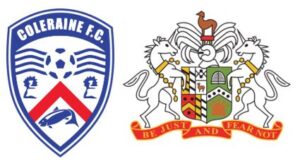