Halifax visits Chesterfield to claim pole position heading into the new year. The Spireites will also be looking towards clearing the lead of points standing at the first spot of standings.

Free Match Tips from Punditfeed for Chesterfield vs Halifax

Here are some bias-free tips we have put together for Chesterfield vs Halifax.

Match Result: Chesterfield to win @ “Odds yet to be announced”

Chesterfield vs Halifax to Win

Besides the defeat in the recent game without playing, Chesterfield held a long streak of unbeaten games before this fixture. The Spireites have won three of the last five league outings while drawing the remaining two. But the next rivals, Halifax would not be an easy challenge who enter the game after the run of three consecutive victories. The Shaymen also had successive wins in the recent meetings against Chesterfield but the hosts seem to have their confidence back following the last H2H victory. The fixture promises to be a tough duel but we see Chesterfield with the home advantage and three points at the end.

Chesterfield has been able to produce the goals with an average of over two goals per game in the last five attempts. On the other hand, Halifax also has managed to collect nine goals in the same course, scoring at least two in three of them. Adding more, three of the previous four H2Hs of these teams featured a high-scoring output and the same is our next pick for his game.

All of the recent games and H2Hs of the teams pointing out a BTTS outcome for this match. The Spireites’ front line enter this game after a long run of incredible form, scoring in almost all of the games of this season. Same to their hosts, the Shaymen also netted the ball in most of the recent outings, missing the chance only once in the last five attempts. But Halifax has scored in all of the latest meetings against Chesterfield. Four of the last five H2Hs of these teams followed a BTTS outcome as well.

After getting a couple of games postponed, the Spireites are back to their home game and play a crucial fixture. The team has got equal points to their coming rivals and leads the table but with one match in hand, Chesterfield has a clear chance to make their spot more resolved. James Rowe’s men have lost only one in the 18 games of the season, winning 11 of them. All the players on the squad are ready to play without any injury issues.

Following the streak of wins in the National League, the Shaymen continued their form in their last meeting of the FA Trophy against Bradford PA. Halifax have secured the most number of wins in the league and the recent streak sent them straight to the second in the points table. The manager Pete Wild has zero fitness concerns in his team ahead of this game.

Looking for the best odds for Chesterfield vs Halifax? We’ve got you covered. Check out our list of odds from the popular bookies and a few important stats to help you make a good prediction.

FAQ about Chesterfield vs Halifax 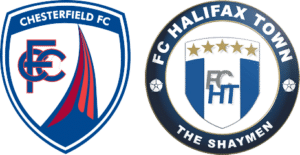 Where is the game being played? Technique Stadium.

What was the last H2H result? 1-2 in favour of Chesterfield.